Stewart Regan "took the rap" for problems at the Scottish FA which is in need of "restructuring" to be fit for purpose, says Celtic's Peter Lawwell.

Regan stepped down as chief executive as the governing body seeks his replacement and a new manager.

"The problems [on the board] appear to be significant," he said.

Walter Smith, one of the candidates being considered by the SFA, has ruled himself out of the running for a return to the Scotland manager's job.

Meanwhile, the SFA's chief operating officer Andrew McKinlay, who was standing in as interim chief executive after Regan's departure, is to leave the governing body in May to become chief executive of Scottish Golf.

"I came off the [SFA] board a couple of years ago; from the outside looking in, clearly, there are problems," said Lawwell.

"The problems appear to be significant and it seems that Stewart Regan has taken the rap for that, in terms of the changes over the last couple of weeks.

'What is the purpose of the SFA in the modern game?'

"I think there are others in there, who have presided over the SFA for a number of years, that really need to have a look at themselves just now. I don't think it's worth personalising, but clearly there are issues that need to be addressed. On the other hand, I think there are positives.

"You have a board there with very capable people in Mike Mulraney, who represent the clubs, alongside Ian Maxwell. And you've got independent non-executives in Gary Hughes and Ana Stewart who are capable people.

"I think it's time for these guys to be given their head and maybe given a bit more authority to actually understand what is the purpose of the SFA in the modern game? And how does that relate to the SPFL and the clubs?

"I think there should be a process of restructuring, re-organising that allows the SFA to be fit for that purpose.

"There is an opportunity for everyone to sit down, look at what they should be doing, look at what's gone wrong, learn lessons and move on." 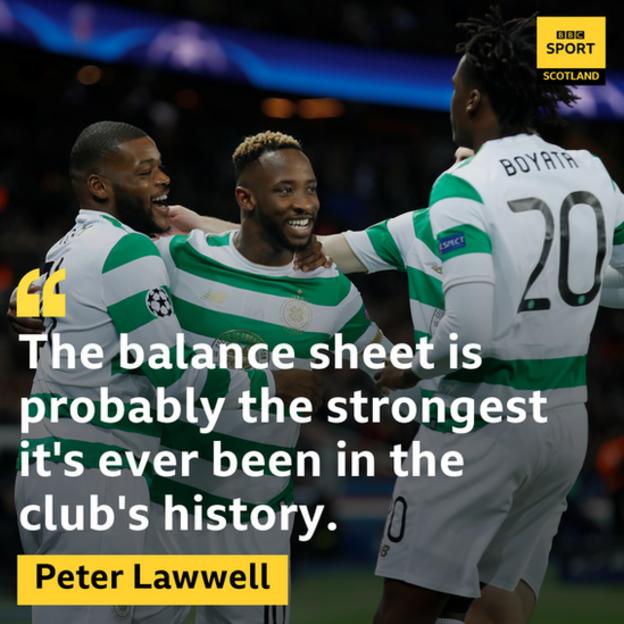 "I think the balance sheet is probably the strongest it's ever been in the club's history," said Lawwell. "That allows us to plan for the future and invest in the squad; and also the infrastructure around Celtic Park.

"We're well-resourced. In football, it can be very volatile and very unpredictable but we now have a solid base that allows us to take on the challenges that football presents.