Miller, who had been suffering from cancer, was in the youth set-up with McManus and made his first-team debut three years before the defender.

"He was the figure that all of us looked at," McManus said.

"You always wanted to be just like Liam and emulate everything that he did. He was the fittest [and] the best technical footballer in our group."

Miller was 19 months older than McManus, but there was a camaraderie among the Celtic youth players that carried across the age groups.

The midfielder moved to Glasgow from Cork at 16 to sign for Celtic, and made his debut under Martin O'Neill in 2000. A loan spell at AGF Aarhus followed, before he made such an impact on his return to Celtic that he signed a pre-contract agreement with Manchester United in 2004.

McManus broke into the Celtic first team in 2004, going on to captain the side, and continued to follow Miller's career after he left Glasgow, which took in stints at Leeds United, Sunderland and Hibernian, amongst others.

"You kept in touch now and again," said McManus, who is now on Motherwell's coaching staff. "In football you spend a lot of time with a lot of people then career paths go in different directions. You meet up and it's the exact same that it was years before.

"You never lose that bond once you've made it, and as young players coming through, that group had that.

"Liam was the age group above me, but the group of boys was very close. 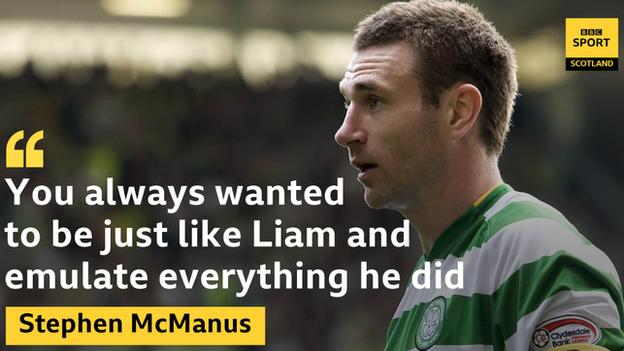 "When you grow up as a young player, there are always people that you hold in such high regard and Liam was one of them. He was a very humble guy and he touched the lives of so many people.

"When he walked into the room he just had this presence that made everybody smile. They were wonderful experiences and times with Liam and that group.

"It's really, really sad news. It's a tough one to take. I got told a couple of months ago that his health was struggling and I was devastated, the same as anybody else who would have played with him. Your thoughts are with his family, his wife and his children at this horrendous time."