League One Wigan produced one of the biggest FA Cup giant-killings by knocking Premier League leaders Manchester City out with a 1-0 fifth-round victory on Monday.

It was a repeat of the 2013 FA Cup final, when the Latics left it late to score the only goal.

Back then, both sides were in the Premier League. Wigan have since dropped down two divisions and are now 43 places below City.

So just how big is the gulf between the sides, and how impressive are the statistics behind Wigan's win?

The value of the respective squads highlighted the gulf between the two sides.

Manchester City have, according to research group CIES Football Observatory, the most expensive squad in football and fielded a team on Monday that is valued at about £349m.

Wigan, meanwhile, had a starting XI that featured eight players signed on free transfers. Goalscorer Will Grigg is the Latics' most expensive player at £1.3m. 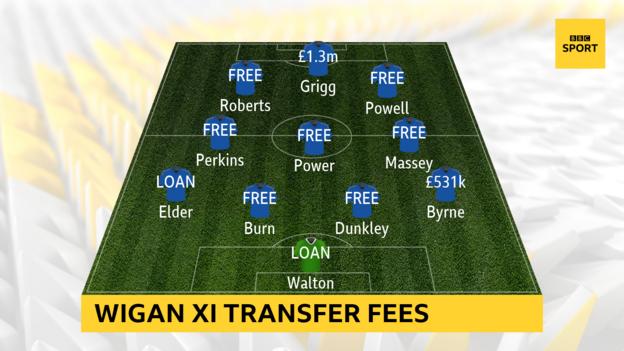 How one-sided was the game? 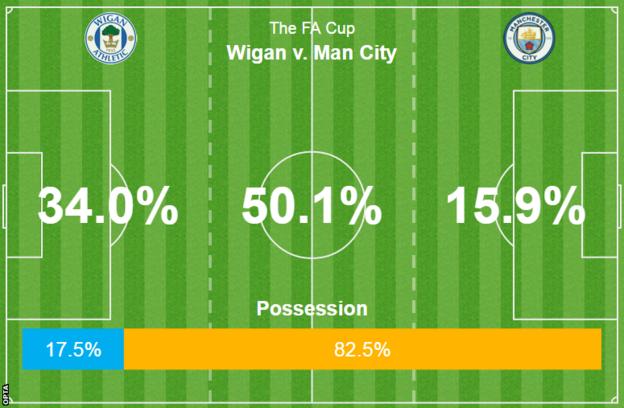 Wigan beat City despite having just 17.5% possession, and they scored from the second of their two shots on target.

City, meanwhile, had 29 shots on goal, 17 of which were blocked and only five of which found the target.

Wigan are one of just three teams to have beaten Manchester City this season.

Shakhtar Donetsk beat them 2-1 in the Champions League in December while Liverpool won a seven-goal Premier League thriller in January.

'An unbelievable performance and result' - what BBC pundits said

"We said it before, if it was a league game, we couldn't see them winning, but this is the cup.

"The FA Cup is without doubt the best cup competition in world football. An incredible story."

"Magnificent from Wigan. The effort, the commitment, the last-ditch efforts to block shots.

"City dominated possession, but rarely challenged the keeper. What an unbelievable performance and result."

Where does this rank in FA Cup shocks?

The FA Cup has seen some big shocks throughout its long and illustrious history, but this was certainly one of the biggest.

There is, of course, Wigan's win over City in the 2013 FA Cup final, but both sides were in the same division then.

In terms of lower-league sides knocking out top-flight opposition, the most recent shock of this magnitude was probably Bradford City's fourth-round win against Chelsea in 2015. Bradford, like Wigan are now, were in League One at the time.

The Bantams came back from 2-0 down at Stamford Bridge to win that game 4-2.

Back then, Coventry were in the old First Division - now the Premier League - and that is considered one of the greatest upsets of all time.

There have been plenty of other upsets over the years - too many to mention here - so tell us your biggest shock in the comment section below.

Henrietta: I'm not sure I've ever seen a team win with 17% of possession.

Thomas: Doesn't matter what league you're in or how much money you have there is something special about playing in the FA Cup, there is no other cup in world club football that can match it.

Gary: The FA Cup will never lose its magic. Celebrated Rochdale's equaliser and Wigan's winner like a mad man. I don't support either team, but I did in those moments.

Daniel: Congratulations to Wigan on a quite an extraordinary result! Showing the Premier League how it is done! Should be proud of themselves after a quite phenomenal performance! Determination, fight and passion got them through that!

Grant: Will Grigg is on fire! Who would have thought City would be put out by a League One side?