Finally, we can focus on the football again.

I am sure the new England women's head coach Phil Neville is thinking the same thing as he prepares for his first games in charge of the Lionesses.

It is time to put the controversy that surrounded Mark Sampson's departure and Neville's appointment behind us.

This is the beginning of an exciting new chapter for the national team, and the SheBelieves Cup in the USA is a brilliant tournament for Neville to get started with.

It will be a very tough test for England, who will play hosts United States, Germany and France over the next week.

Our opponents are the best teams in the world, and all three are at the kind of level you could expect in the semi-finals of a World Cup. 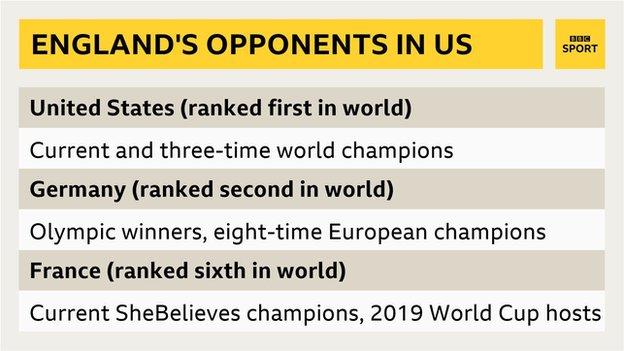 It is a daunting prospect for a new manager but I think Neville would prefer games like this now rather than low-key World Cup qualifiers against the likes of Kazakhstan or Bosnia-Herzegovina, which England would be expected to win convincingly.

Given his personality, the career he has had and the goals he has already set his new team, he will be relishing this challenge.

Right now Neville will be looking forward to taking ownership of the team and taking responsibility for their performances out in the US, but his targets for this tournament will not come down to results alone.

England must show they belong among the best in the world

This is a friendly tournament but there will be nothing friendly about the way the US, Germany and France approach it.

Every single one of them is there to win it - they think they are the best and they want to win everything they can. They will go into these games expecting success.

But Neville wants us to have that expectation too, and he will want his players to show that they can deal with the pressure that comes with it.

I have loved hearing him speak about trying to instil the same winning mentality in the England team as, say, the US have got - and demanding we show the same arrogance as them as well.

Neville is right when he says we should not be embarrassed about being the third-best team in the world and one of the favourites for next year's World Cup.

We have that ranking because of our ability - technically and tactically - in every department.

The girls have already shown their professionalism with the way they have dealt with the off-field issues that have affected the England team over the past few months.

Now they need to show their mental strength in a different way.

Shift in mentality is Neville's task

Going from being the third-best team in the world to the best is a tiny step in some ways because there are only two teams above us.

The difference in quality between our best players and theirs is minimal, if it exists at all.

But the US know they are winners, and so do Germany. We have not won anything, ever.

We want to change that, which is why I think it is a huge positive to have Neville in charge.

That is the biggest change this team needs and Neville can implement it, because he has lived and breathed the approach we will need throughout his whole career.

He could do a lot worse than telling his players to watch how the United States carry themselves on and off the pitch, with their body language and what they do and say.

Those are the type of things they might not have thought about before and, if they are, they have not tried to emulate or imitate them.

Whether they are experienced players or at their first tournament with England, now is the time to start - the World Cup is only 17 months away.

More flair is the way forward for England

It is going to take Neville a bit of time to work out what formation and style of play will work best for him, especially with the players who are absent.

I am expecting to see him try a few variations, but I was pleased to hear him talk about adding some flair to England's approach.

We reached the semi-finals of the European Championship last year but, tactically, Sampson was quite cautious and I don't think he played to our strengths.

We are a much better team when we are in possession than when we play long balls, and trying to be more creative with the way we play is definitely the way forward with the players we have at our disposal.

Manchester City and Chelsea, who between them provided 15 of the 23 players in Neville's initial squad, both play out from the back in the same way he wants England to.

That way of playing is not something we have put our trust in before but this team are ready to evolve because of the technical ability of the players we have, which is much improved since my playing days.

It is no coincidence that has happened since the women's game went professional over here, and those quality of players are going to keep coming through.

We already know England are well-drilled and disciplined defensively, but now it is the right time to add to that by being more ambitious at the other end of the pitch.

Inexperience is an advantage for Neville this time

Any changes we see from England this week do not have to be dramatic, and Neville will know that.

His strategy will be to move the team forward in the right direction in the ways I have mentioned but that will not happen in one week and, whatever happens in the US, his overall plan is not going to change.

This is Neville's first opportunity to work with the girls on the training pitch, and it is his first chance to actually imprint some of the ideas he would like to apply.

England are missing some key players, like captain Steph Houghton through injury, but that is part and parcel of international football. It means someone else gets a chance to impress.

Neville also does not have a permanent assistant coach yet, but he will have Mo Marley and Casey Stoney helping him in the US.

He will get a lot of information and advice about the squad from them, because they know the players better than anyone.

But the majority of ideas that he will be trying to get across to the team will be his own.

The fact he does not know much about the women's game at the moment is something he can use to his advantage, because he will have no preconceptions about what to expect in this tournament.

He will be able to gauge for himself, with a fresh pair of eyes, where his team are at as a unit and individually, and work out who, what and where he can improve.

Seeing the American way is a great experience

The next few days are going to be wonderful experience for Neville, and from what he has said already about wanting to learn, he will soak it all up.

There are a number of reasons that the United States is the perfect place to find out what top of the women's game is all about, and my advice to Neville is take in as much as he can.

I remember when I went to university there as an 18-year-old and seeing for myself their passion for women's football, not only from the fans but also commercially.

It is wonderful to see your counterparts treated like superstars. It inspired me, and it will be the same for Neville and his players.

The profile of women's footballers has been raised massively in this country recently but they do not have the status the US players are afforded, and it is something for them to aim for.

This tournament will be special for our girls because they will be playing in front of packed-out stadiums and getting used to that feeling of big games and big occasions.

Neville already knows what that is like from his days with Manchester United and England but many of his squad won't. Another target for them is to have more matches like these at major tournaments in the future.