Mauricio Pochettino says it will be "fantastic" for Tottenham's new stadium to stage Champions League football in its first season after Christian Eriksen's double saw them beat Stoke.

Spurs took a big step towards securing a top-four finish with victory at the relegation-threatened Potters - their sixth successive Premier League win.

The north London side are level on points with third-placed Liverpool and 11 ahead of fifth-placed Chelsea, who host West Ham on Sunday.

Spurs, who are using Wembley for home games this season, are due to move to their new ground for 2018-19, and manager Pochettino said: "To have the opportunity to play in the Champions League in the new stadium will be a fantastic achievement.

"For us it would be a massive achievement to finish top four for a third time."

Stoke frustrated their opponents before Eriksen fired Spurs into the lead from inside the penalty area after Dele Alli's pass.

Mame Biram Diouf equalised after a mistake by keeper Hugo Lloris, whose attempted clearance cannoned off the Stoke striker and fell kindly for Diouf to roll the ball into the net.

In an entertaining match, Eriksen scored the winner from a free-kick before Xherdan Shaqiri was denied a late equaliser when his free-kick hit the bar.

Although Tottenham were far from their best, this was another positive day for Pochettino as Harry Kane returned to the starting line-up after a recovering from a damaged ankle.

The England striker was quiet by his usual standards before claiming he got the faintest of touches to Eriksen's free-kick for the winning goal.

"It was my goal, it flicked off my shoulder and went in," he said after the game.

However, the Premier League tweeted that the goal had been awarded to Eriksen after a review by the league's Match Centre.

In the end, all that mattered for Pochettino is that his side had secured three more points at a venue where both Arsenal and Manchester United have tripped up this season.

"After his injury, to play 90 minutes today is going to help Harry," added Pochettino.

Another hard luck story for Stoke

For the second successive weekend Stoke produced a battling performance but once again emerged with no reward.

They worked hard at Arsenal before conceding three late goals and this was another hard luck tale to add to the collection.

Paul Lambert's side limited one of the Premier League's form teams to just one serious chance in the first half, Jack Butland producing an excellent save to deny Son Heung-min.

Diouf should have scored two goals before Eriksen broke the deadlock while Shaqiri was frustrated by the bar as Spurs led 2-1. 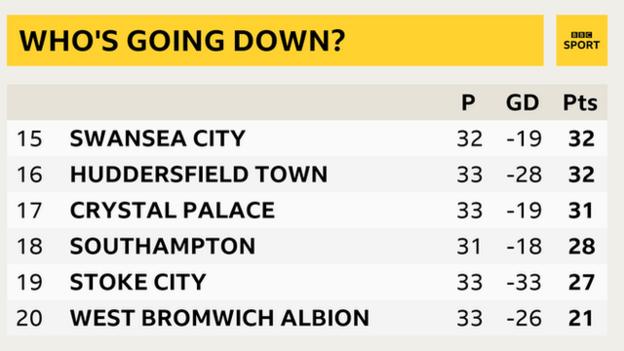 Stoke had started the day three points from safety. They are now four points from 17th place with five games remaining, including a trip to Liverpool on 28 April.

"Two weeks in a row we come away with nothing," Lambert told BBC Sport.

"The effort and commitment I can not ask more of, we are just not getting the breaks. If they played like that at the beginning of season we would not be in position we are in."

Stoke desperately need a win from somewhere - not another hard luck story.

"I think we have to win at least three games now," added Lambert. "As long as belief and fight is there, we are in with a fighting chance."

Kane or Eriksen? Whose goal was it?

Tottenham boss Mauricio Pochettino: "It doesn't matter if it was Christian or Harry. It's the three points that are the most important for us."

Christian Eriksen: "Harry celebrated like it was his goal so I will have to take his word for it."

Stoke have nine days to recover before they face fellow strugglers West Ham at London Stadium on Monday, 16 April (20:00 BST). Tottenham entertain Manchester City at Wembley in a fourth-versus-first game next Saturday (19:45 BST).