Newcastle United manager Rafael Benitez says his side are "nearly" safe from relegation after goals from Jonjo Shelvey and Ayoze Perez guided his side to victory at Leicester City - their third Premier League win in a row.

The Magpies started the brighter at the King Power, and Shelvey's guided shot from outside the area opened the scoring after a deflection off Ben Chilwell.

Leicester felt they should have had a penalty before the break when Paul Dummett and Riyad Mahrez appeared to collide in the box.

But Spaniard Perez doubled the lead for Rafael Benitez's side 15 minutes from time with a delightful lob over Kasper Schmeichel.

Jamie Vardy grabbed a late goal from close range, but it proved to be only a consolation for the hosts.

Earlier, Harry Maguire appeared fortunate to remain on the pitch after putting his hands on the face of Newcastle's Dwight Gayle, but the England man was shown only a yellow card by referee Stuart Attwell.

Newcastle's victory, which followed back-to-back home wins against Southampton and Huddersfield, takes the Magpies up to 10th in the Premier League, 10 points clear of the bottom three.

However, this result, coupled with Burnley's win at Watford, was damaging for Leicester's hopes of qualifying for European competition in 2018-19. The Clarets have now opened up a six-point lead over the Foxes in seventh.

Defeat at the hands of Newcastle has put Leicester's season at risk of fizzling out.

Unless Southampton win the FA Cup, the seventh-placed team will qualify for the next season's Europa League.

With just six games to play, the Foxes' visit to Burnley in a week's time will be seen as a must win in order to keep pace with the Lancashire side.

No football supporter will need reminding that it is just two years since the Foxes became Premier League champions.

And the carrot of Europa League football might be needed to provide manager Claude Puel with a bargaining chip when it comes to summer recruitment. 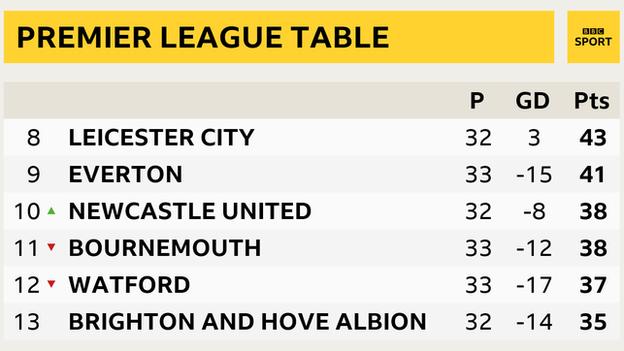 Three straight wins for Benitez's side have turned a scrap to stay in the top flight into a concerted drive into the top half.

The Magpies have lost just two league games since the turn of the year - and those defeats came at free-scoring Manchester City and Liverpool.

Had it not been for Vardy's late goal, the 2017 Championship winners would have kept a third straight clean sheet.

For the most part, it has been a season of uncertainty for the north-east club off the pitch, with owner Mike Ashley having put them up for sale in October before talks over a potential £250m sale collapsed.

But on it they seem to have found direction and, with their relegation fears now all but erased, freedom to play.

'We have to carry on' - what they said

Leicester manager Claude Puel: "It was not enough today. We wasted a fantastic opportunity for this team to believe in themselves. It was not enough in the first half, it was better in the second half with our reaction, but it's a shame. We will discuss together.

"We know when we play sometimes like today against a team with a strong defensive unit, we have to play quickly and with quality. It was too slow. We believe in ourselves to come back with a good mentality, hard work in training and prepare for our next game with a good feeling."

On Riyad Mahrez's penalty appeal: "Yeah, he [Paul Dummet] touched his foot, for me it is a penalty."

Newcastle manager Rafael Benitez: "It was amazing, the effort of the players, the way they were working, creating chances and the connection with the fans, who were amazing too.

On whether Harry Maguire should have been sent off: "I have had players sent off just for touching the face of a player. I cannot argue too much. And the main thing for us was the performance of the team, we deserved to win."

Leicester's next fixture is a Premier League trip to Burnley on Saturday, 14 April (15:00 BST).