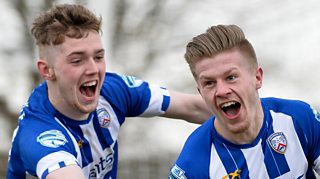 Coleraine are through to the Irish Cup final for a second year in a row after beating Championship side Larne 3-1 at the Ballymena Showgrounds.

Josh Carson hit a penalty to put the game out of Larne's reach with the last kick of the game as Coleraine's bid for a league and cup double remains on track.

'We think of all our players as Irish'