Manchester United midfielder Paul Pogba says he has "no problem" with manager Jose Mourinho and is not thinking of leaving, despite the 25-year-old Frenchman being left on the bench recently. (Telefoot via Manchester Evening News)

Conte says he is "not worried" about his future as Chelsea manger after a defeat by Tottenham left his side struggling to qualify for next season's Champions League. (Guardian)

Barcelona's 24-year-old France defender Samuel Umtiti, who has been linked with Manchester United, says the fact his release clause "isn't that high" concerns him - but he is "very happy" at the club. (Express)

Roma have had "no offers" for Brazilian goalkeeper Alisson, 25, and have "no intention of selling", according to the Italian club's director of sport Monchi. Alisson has been linked with Liverpool.(Mediaset Premium via Football Italia)

West Ham will have to pay Sporting Lisbon 30m euros (£27m) if they want to sign Rodrigo Battaglia, with Italian trio Inter Milan, Roma and Napoli all interested in the 26-year-old Argentine midfielder. (O Jogo - in Portuguese)

West Ham boss David Moyes has suggested he is yet to decide whether to turn 25-year-old midfielder Joao Mario's loan move from Inter Milan into a permanent transfer. (Times - subscription required)

Sunderland are interested in 24-year-old Reading goalkeeper Jonathan Bond, who is out of contract at the end of the season. (Newcastle Chronicle)

Who has 'hands of bronze'?

Manchester City striker Sergio Aguero will be fit enough for a place on the bench for the first leg of their Champions League quarter-final with Liverpool. (Star)

Former referees' chief Keith Hackett says referee Craig Pawson did not deal with tackles from Tottenham's Erik Lamela and Jan Vertonghen "correctly" in their side's win at Chelsea and that "if VAR had been in use, Tottenham would have finished the game with nine men". (Telegraph)

Stoke boss Paul Lambert wants VAR in the Premier League after a controversial penalty was awarded against his side for the opening goal in a 3-0 defeat at Arsenal. (Mail)

Manchester United manager Jose Mourinho has defended his second-placed side's form this season, telling journalists "you all say the third, fourth, fifth, sixth are better than us, but they're not, because we have more points than them". (Mirror)

Huddersfield boss David Wagner says his side have "everything you need" to avoid relegation from the Premier League. (Huddersfield Examiner)

Bournemouth striker Jermain Defoe claims he could win the World Cup for England if Gareth Southgate takes him to Russia. (Telegraph) 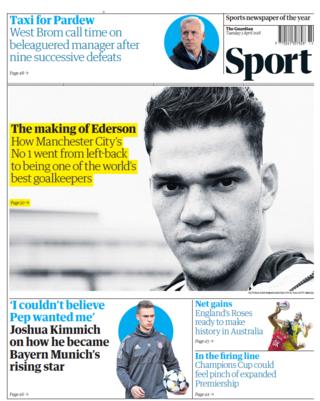 The Guardian back page on Tuesday