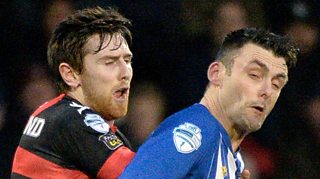 Honours even between Crusaders and Coleraine

Crusaders are still two points ahead in the race for the the Irish Premiership title following a 1-1 draw against Coleraine in their top-of-the-table battle at Seaview.

Coleraine took the lead when Jamie McGonigle converted a 67th minute penalty, which put the visitors on course to overtake the league leaders.

But David Cushley scored an 85th minute equaliser for Crues, which was the club's 100th league goal of the season.

Premier League reaction: West Ham up to fifth, Fulham out of bottom three

'Project Big Picture is toxic, but major change will happen'

Sports Personality of the Year: First contender announced from 08:40 GMT