Former England and Chelsea midfielder Ray Wilkins has died in hospital at the age of 61.

His family thanked "Ray's friends, colleagues and members of the public" for the many messages of goodwill.

Chelsea said they were "devastated to learn of the passing of our former player, captain and assistant coach".

The club added: "Rest in peace, Ray, you will be dreadfully missed."

Wilkins' family said: "It is with great sadness we announce that Raymond Colin Wilkins passed away this morning.

"We are asking for privacy at this very difficult time."

Wilkins, who had been working as a TV and radio pundit, had suffered poor health in recent years and had double bypass heart surgery in July 2017.

He also admitted struggling with alcohol problems in the past and went through a five-week rehabilitation programme in the Priory Hospital in Woking in 2016 following a four-year ban for drink-driving.

As a player he made 84 appearances for England and captained his country 10 times, while he won the FA Cup with Manchester United in 1983 and the Scottish league title with Rangers in 1989.

Wilkins had spells as manager of QPR, Fulham and the Jordan national team.

He was also Chelsea assistant coach from 1998-2000 and then 2008 until 2010, when he worked alongside Guus Hiddink and Carlo Ancelotti.

Before Wednesday evening's Milan derby, former AC Milan team-mate Franco Baresi led a minute's applause in honour of Wilkins, and laid a bouquet of flowers and a 'Wilkins 8' Milan shirt in front of the famous Curva Sud stand.

The EFL said a period of applause will be held before Sunday's Checkatrade Trophy final at Wembley Stadium between Lincoln City and Shrewsbury Town and that it would offer its "full support for any proposed marks of respect" from any clubs.

'Elegant, a visionary, a leader'

Wilkins' career was characterised by maturity and dignity, which was recognised early in his time at Chelsea, where he made his debut as a 17-year-old in October 1973 before being awarded the captaincy at just 18 by then manager Eddie McCreadie.

He went on to make his England debut in the Bicentennial Tournament against Italy in New York City in May 1976 and had a burgeoning reputation as one of the young pin-up boys of English football, as well as one of its most promising talents.

Wilkins led a group of emerging Chelsea youngsters back into the top flight, but once they were relegated again it became inevitable that top-flight clubs would pounce. So it proved as he signed for Manchester United in August 1979.

He acquired an unfair reputation for a conservative playing style, with one cruel nickname of 'The Crab' mocking his supposed preference for sideways passes.

Those who actually played with Wilkins thought differently and spoke of an elegant, visionary midfield player and leader whose abilities were underrated, as evidenced by the calibre of clubs who were always keen to secure his services.

READ MORE: Farewell to a footballing nomad and an 'absolute gentleman'

'He lived for and loved football' - reaction

England manager Gareth Southgate, who played alongside Wilkins at Crystal Palace: "When he played with us you could immediately see that his technical ability to play the ball was phenomenal.

"In the modern game, those attributes would have been appreciated far more than they were at that time, so he really was a top, top player.

"He would have been one of the earliest to go abroad and play in the Italian league. At the time, it was at a really high level so being able to transition into a club like AC Milan and be as popular as he was there speaks volumes for his ability.

"It was really sad when I heard what happened at the weekend. It's happened so suddenly and it's tragic for Jackie and his family.

"Ray was a great ambassador for the game, a proud Englishman who loved playing for his country and an absolute gent - a class act."

Former Manchester United manager Sir Alex Ferguson: "Ray was a great football man who was well respected and liked by all who knew him and he always had a kind word and time for people.

"Ray was an impressive football talent and had a fantastic career representing some of the biggest clubs in the world. He will be missed by us all."

Former Chelsea midfielder Frank Lampard: "Devastated to hear the news that Ray Wilkins has passed away. He was a great player and an even greater man. Full of kindness and humility, with impeccable manners at all times. He had respect and time for everyone and to me he was a mentor and a friend. I'm not sure they make them like Ray anymore. You will be sorely missed fella."

Ex-Liverpool defender Mark Lawrenson: "Was only two weeks ago I was with Ray in Brighton... Feel Empty - Much love to all the Family... Life is Cruel... RIP BUD..."

Premier League chief executive Richard Scudamore: "His passion for the game was second to none and his pleasure in sharing it never diminished. He will be missed by all of us."

Former AC Milan defender Franco Baresi: "In these moments you never know what to say, but it was an honour to have you as a companion, you were special, a gentleman on the field and out. Thank you Ray Wilkins RIP."

Ex-England striker Gary Lineker: "Deeply saddened to hear that Ray Wilkins has passed away. A wonderful footballer and a delightful man. It was a pleasure to have played alongside him with England. No team-mate was more helpful and supportive. I'll be forever grateful. Thoughts are with his family. #RIPRay."

Former Manchester United goalkeeper Peter Schmeichel: "Sad and choked to hear of the passing of Ray Wilkins. A true football person with a totally underestimated contribution to our sport. One of the best I've seen. My thoughts are with his family. Rest in peace."

Ex-England winger Chris Waddle: "So sorry to hear about Ray Wilkins a great player and a true gentleman RIP."

Former England and Newcastle striker Alan Shearer: "So sad to hear the news about Ray Wilkins. He lived for and loved football. I was lucky enough to have worked with him and he was always a true gentleman. He will be sorely missed by so many. #RIPRay."

"He became an instant star at Chelsea and when he went to Old Trafford in a big money move there was a lot of pressure on him. He found it difficult initially but he won the fans over and became a legend there - he became a legend wherever he played.

"In today's game, money couldn't buy him - he was a gifted individual, such a talented footballer."

League Managers Association chairman Howard Wilkinson: "Ray lived and breathed football his whole career. As a player, he was a leader on the pitch and he instilled his beliefs and values into his coaching, helping a vast number of players understand what it meant to win games of football at the highest level.

"Ray has been a stalwart of the LMA for many years. His energy and love of the game were his biggest strengths. As well as being a manager in his own right, he became one of the most supportive and trusted assistant managers in the Premier League, providing a sounding board to many managers in the past 20 years and achieving great successes with his boyhood club, Chelsea.

"Many things come to mind when I think of Ray but, above all, no matter what the circumstances he remained a true gentleman."

Aston Villa midfielder Jack Grealish: "So upset to hear the news of Ray Wilkins. RIP Ray. Even when Ray left Villa, he was always ringing me offering advice and telling me what I could do to improve. A true gentleman and one of the nicest guys I've ever met."

Former England and Manchester United defender Rio Ferdinand: "RIP Ray Wilkins. Always so humble & softly spoken whenever I saw him. Genuine lovely guy. Watched him live at Loftus Road many times for QPR. What a great passer & teacher of the game for any young kids who watched him."

Ex-Rangers defender and team-mate John Brown: "It was a privilege to have played alongside Ray and to have known him as a true friend and gentleman." 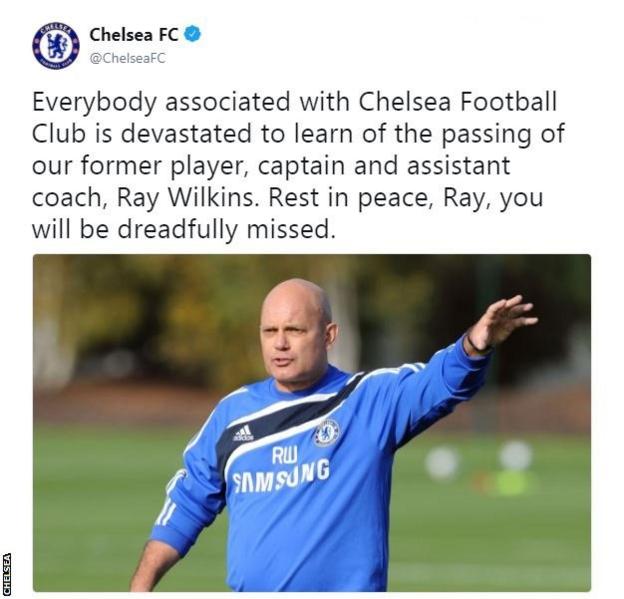 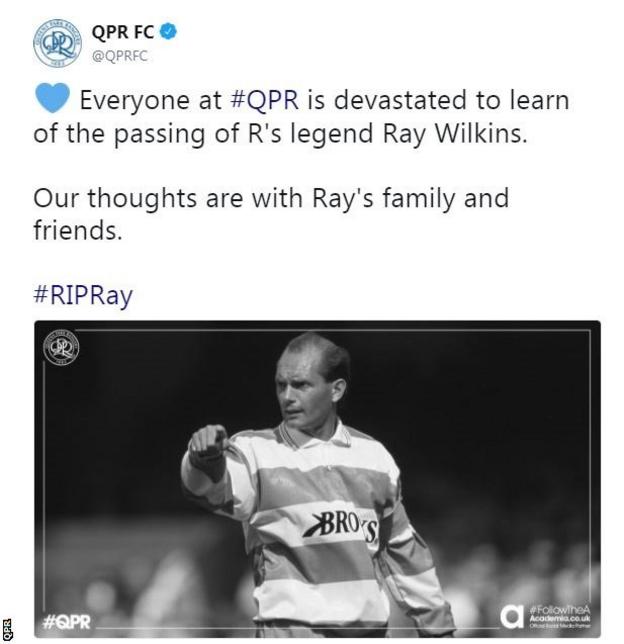 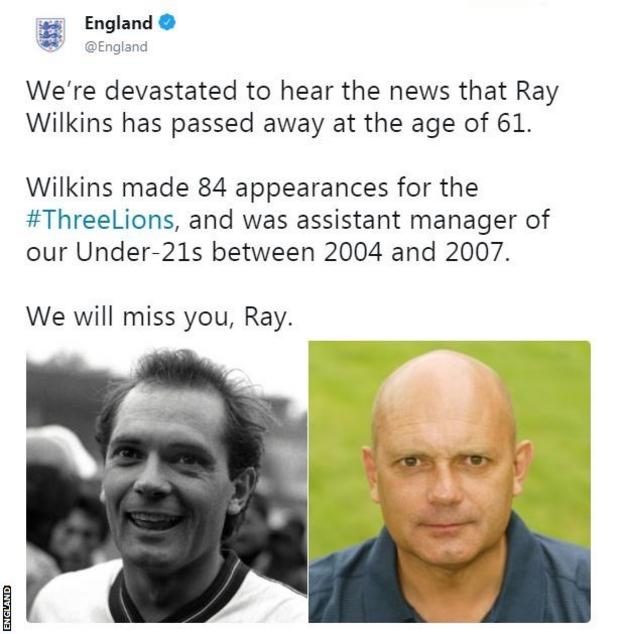 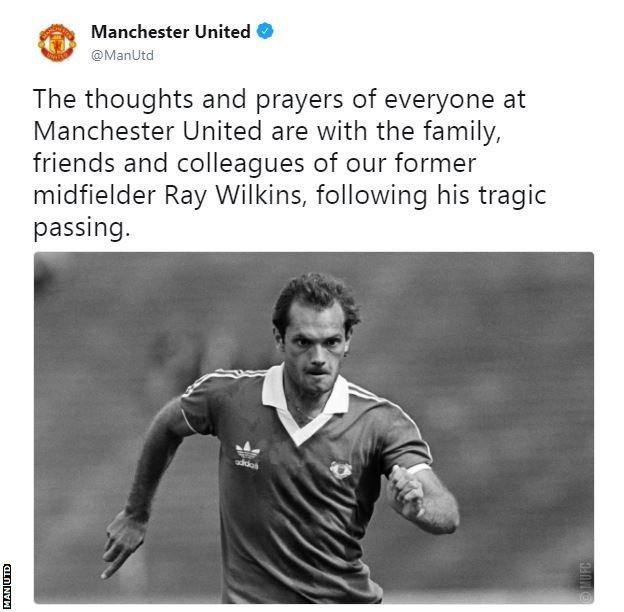 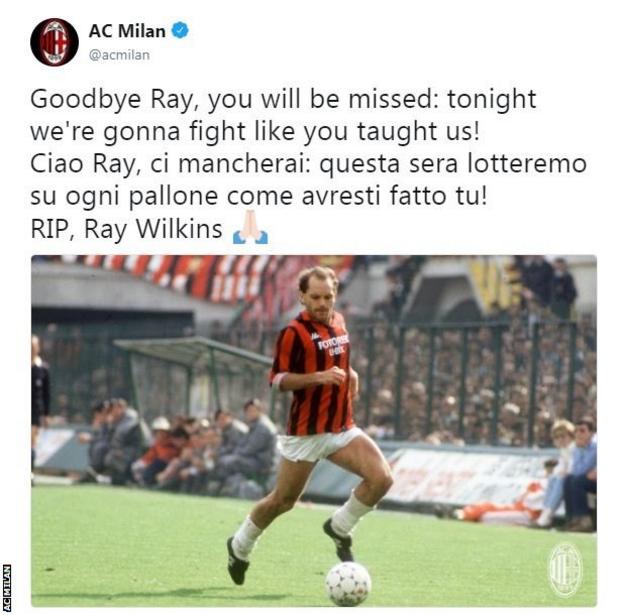 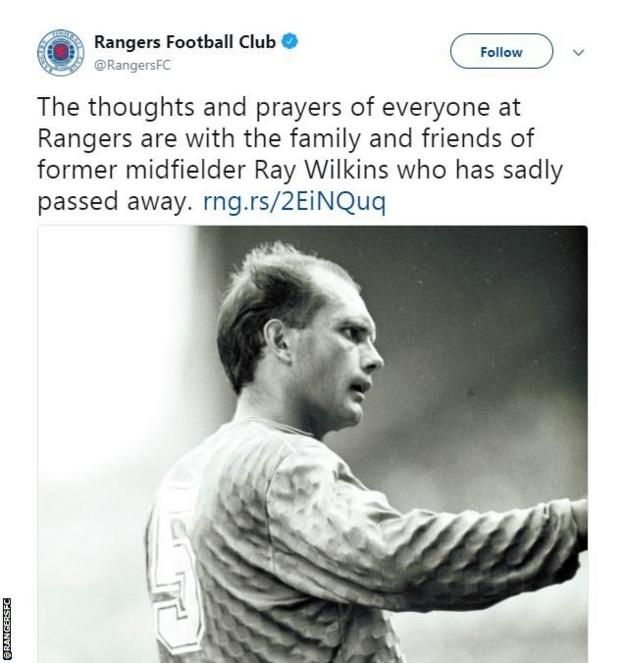