Merseyside Police have asked the public to send them footage of Manchester City's team bus being attacked at Anfield on Wednesday.

Cans, bottles and flares were thrown at the bus as a crowd gathered before the 3-0 Champions League quarter-final first-leg loss to Liverpool.

And his assistant Manuel Estiarte posted footage from inside the bus on social media and called the incident "unacceptable".

No players or staff were injured but two police officers were hurt and the coach was left unsafe to be driven.

Uefa has charged Liverpool over the setting off of fireworks, throwing objects, acts of damage and crowd disturbances.

"The charges of acts of damage and crowd disturbances relate to incidents involving the Manchester City team bus," a spokesperson said.

The case will be dealt with by Uefa's disciplinary body on 31 May - five days after the Champions League final takes place.

Route announcement 'not to blame'

Before the match, Merseyside Police had issued a statement saying the two team coaches would "not be taking their usual route" because of "building works and to ensure the safety of fans".

Liverpool also shared the statement and asked their supporters "to gather to show their passion and support for the team... in a friendly, respectful and considerate manner".

However, BBC Sport understands the police are unhappy at reports insinuating the route notification was partly to blame for what happened.

They believe that not publicising the changes could have resulted in fans gathering along the original route then rushing en-masse to where the coaches did arrive instead.

And they point out that both areas are close to Anfield and that fans were going to gather outside the stadium regardless.

Merseyside Police match commander, superintendent Paul White, said two officers suffered cuts and swelling after one was struck by an object and another cut by glass during the incident.

He said the force would do "everything in our power" to find the people responsible as they review CCTV and officers' body-camera footage.

"We know many people were filming the events with camera phones and ask that anyone with any footage of the projectiles being thrown send it to a dedicated email address so that it can be reviewed: team.coach.incident@merseyside.police.uk" he said.

Incident 'soured the night for the club' - Gerrard

Guardiola said he "did not expect" the incident to happen and referenced the attack on the Borussia Dortmund team bus last April, which left defender Marc Bartra injured.

"Normally when the police know it is going to happen, they tried to avoid it from happening," said ex-Barcelona and Bayern Munich boss Guardiola. "One year ago something happened in Dortmund.

"We come here to play football and I don't understand this kind of situation.

"The bus is destroyed but I did not expect a prestigious club like Liverpool doing this kind of thing. It is not Liverpool, it is the people, maybe one, two or three, but hopefully it does not happen again."

Liverpool said in a statement: "We apologise unreservedly to Pep Guardiola, his players, staff and officials. The priority now is to establish the facts and offer Manchester City whatever support is necessary."

"We want a great atmosphere and we want to make it hostile for the opposition but certain individuals have overstepped the line and it's bang out of order," he said on BT Sport.

However, Guardiola's players were keen to play down the incident.

Captain Vincent Kompany said it "had no effect on us" and that it was something they have experienced before, while midfielder Kevin de Bruyne said there was "nothing wrong with it".

"Obviously it's not nice if you see windows breaking, that's not a good thing, but I think if supporters line the streets in support without being violent then I think it's OK," he added. 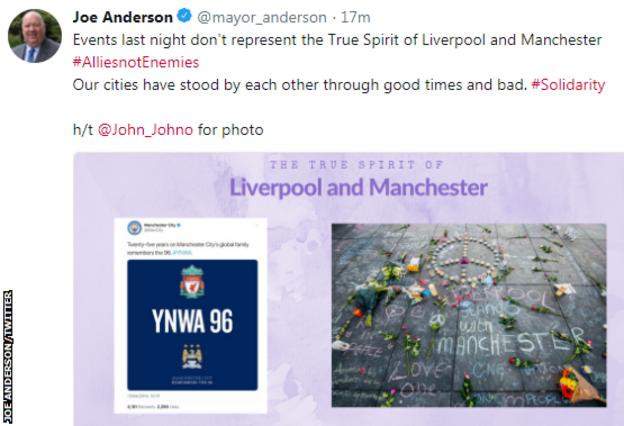