Nice manager Lucien Favre is on Arsenal's shortlist to replace boss Arsene Wenger at the end of the season. (L'Equipe - in French)

Gunners manager Arsene Wenger is "confident" 27-year-old Wales midfielder Aaron Ramsey, who is out of contract at the end of next season, will sign a new long-term deal at Emirates Stadium. (Mail)

Tottenham boss Mauricio Pochettino says chairman Daniel Levy's £6.01m earnings - which equate to £115,000 a week - last year are "not a problem for the players", despite the club trying to keep down the squad's wage bill. (Times - subscription required)

Chelsea manager Antonio Conte says he is "very sad" at the way his side's Premier League title defence has unfolded this season but denied rumours he will leave by adding his intention is "to stay" at the club and "continue my job here". (Guardian)

Manchester City midfielder Kevin de Bruyne, 26, says "the volume is always up" when they play their music and "it's not to mock anybody". Manchester United manager Jose Mourinho complained about the volume of the music from City's dressing room when they beat his side earlier on this season. (Mirror)

Arsenal forward Henrikh Mkhitaryan, 29, could be out for the rest of the season after suffering a knee injury against CSKA Moscow on Thursday. (Telegraph)

Gareth Bale, 28, has no intention of leaving Real Madrid this summer despite the Wales forward having been dropped for recent key games. (AS)

Liverpool are interested in signing 17-year-old Monaco midfielder Christian Koffi, with the Ivorian's contract expiring in the summer. (Mail)

Arsenal are monitoring Benfica's 18-year-old midfielder Joao Felix, who has a £52m release clause but could cost £35m. (O Jogo, via Mirror)

Watford manager Javi Gracia says striker Andre Gray is a "good player" but refused to give any assurances about the 26-year-old's future at the club. (Hertfordshire Mercury)

Stevenage have withdrawn defender Ben Wilmot, 18, from their squad for the match against Newport on Saturday as a deal to sell the Arsenal and Tottenham target is close. (Sun)

Newcastle manager Rafael Benitez has backed midfielder Jonjo Shelvey for a place in England's squad for the World Cup as the 26-year-old is "different from the players England already have and he can do a lot of things". (Guardian) 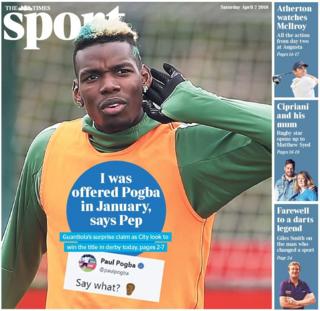 Read more on Liverpool come from behind to beat West Ham