A penalty was awarded after players had already left the pitch for half-time in Mainz's Bundesliga win over relegation rivals Freiburg on Monday.

Referee Guido Winkmann called both sides back from the dressing room after consulting the video assistant referee (VAR) system and penalising Freiburg for handball.

Mainz midfielder Pablo de Blasis scored the penalty to put the hosts 1-0 up.

Speaking to Eurosport at half-time, he added that they had to "accept it with a heavy heart".

"We were under the impression that when the referee blows for half-time that's it," said Saier.

The second half was delayed by fans throwing toilet paper onto the pitch, which was not related to the penalty decision but instead a protest against Bundesliga fixtures being played on Monday nights.

De Blasis scored a second on 78 minutes to secure victory, taking Mainz above Freiburg on goal difference and eight points clear of automatic relegation, while putting the visitors into the relegation play-off spot in 16th.

As the players departed the pitch, Winkmann was told to consult VAR and ran over to the other side of the pitch to watch the replay on a monitor.

Winkmann overturned the decision and awarded the hosts a penalty before having to recall the entire Freiburg side and the handful of Mainz players who had left the pitch.

Following a delay of over six minutes De Blasis scored the penalty in the bottom left corner and Winkmann blew again for half-time, during which the unfortunate Kempf was substituted.

De Blasis added a lucky second as his shot rolled over the line after hitting the inside of the post, with Schwolow out of his goal having passed the ball straight to Mainz midfielder Robin Quaison.

Potentially one of the most vital goals in the fight at the bottom, but a new low for VAR.

The ref maybe shouldn't have sent them off as quickly, it depends on how quickly VAR contacted him.

The problem is not the technology, it is the process. I can't understand why referees are involved in the decision-making process at all, if it is to be used for clear and obvious errors, surely the VAR has to tell the referee what the decision is.

In this case you've got a couple thousand fans off to the bar and they come back thinking it is 0-0.

I still think the penalty is debatable. 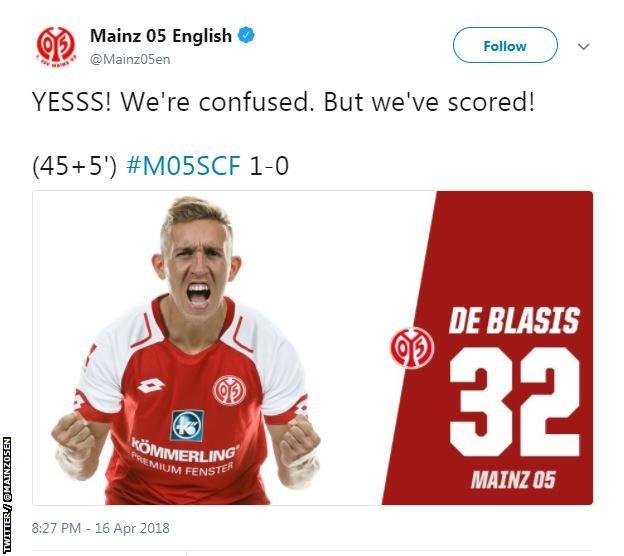