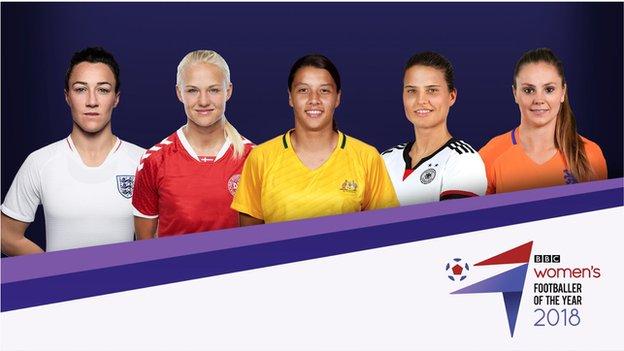 Voting for the BBC Women's Footballer of the Year 2018 has now closed.

Fans from across the world have been voting for their favourite since the five-player shortlist of Lucy Bronze, Pernille Harder, Sam Kerr, Dzsenifer Marozsan and Lieke Martens was revealed on 22 April.

The winner of the award will be announced on Tuesday, 22 May during Sport Today on BBC World Service from 18:30 GMT (19:30 BST) and on BBC World News.

The BBC Sport website will also carry the announcement.

The shortlist was selected by a panel of experts involved in the game from all around the world, including coaches, players, administrators and journalists.

Here we look at the five contenders vying for the BBC World Service honour, which is in its fourth year.

Bronze headed in Manchester City's opening goal as they beat Birmingham City 4-1 to win the Women's FA Cup for the first time in May 2017.

She was a member of the England team who reached the semi-finals of Euro 2017, where they lost to eventual winners and hosts the Netherlands.

The right-back signed for European champions Olympique Lyonnais last August, saying she wanted to improve her technical skills and was seeking a new challenge.

Harder captained Denmark to runners-up spot at Euro 2017, scoring one of the goals as her side lost 4-2 to the Netherlands in a thrilling final.

She helped Wolfsburg win the Bundesliga last season and also scored both of her club's goals as they beat SC Sand 2-1 to win the German Cup in May 2017.

The forward joined Wolfsburg in January 2017, having been top scorer in the Swedish top flight with 23 goals on her way to winning the title with Linkopings.

She scored her first hat-trick for her country as Australia beat Japan 4-2 on their way to winning the 2017 Tournament of Nations and was the top scorer at the event.

She left Sky Blue FC to join Chicago Red Stars in January 2018, and she plays for hometown club Perth Glory in the Australian W-League during the NWSL off-season.

She was the leading provider of assists in the French top flight with 14 in 22 games and scored in both penalty shoot-outs as Lyon beat Paris St-Germain in the Cup and Champions League finals.

Having won an Olympic gold medal at Rio 2016, the midfielder was named Germany captain a few weeks later.

Martens scored three goals at Euro 2017, including one in the final, as her Netherlands team won the title on home soil.

This year she was joint top scorer with three goals at the Algarve Cup, with Netherlands sharing the title with Sweden after the final was cancelled because of heavy rain.