Palace had the match virtually sewn up at half-time after goals from Wilfried Zaha and James McArthur, which both came from fantastic passing moves.

The Foxes upped their intensity early in the second half, but any hopes of a comeback looked out of sight when Marc Albrighton was shown a straight red card for pulling down an onrushing Zaha.

Christian Benteke, on as a late substitute, compounded Leicester's misery when he scored from the spot after being fouled by Harry Maguire.

The result moves Hodgson's side up to 11th, six points clear of the relegation zone with two games to go, although they have played one more match than six teams below them.

"It certainly couldn't have come at a better time," Hodgson told Match of the Day. "It was a really important game for us.

"It's all very well thinking you need one win from the last three games to secure your status, but you have got to get that win."

Asked if Palace were safe, Hodgson added: "I think so. No-one wants to tempt fate too much in that respect, but it would take a lot for a team with 38 points and such a good goal difference as we have to go down.

"If we survive, which I believe we will, it's going to be a very heart-warming occasion for everybody.

"In some way we did expect to get that last win and secure our status, so it's more a relief than celebration."

Leicester, who are ninth, look to be finishing the season with a whimper after picking up only four wins in their past 18 league matches.

This latest result and performance puts more pressure on manager Claude Puel, with speculation already mounting about his future. 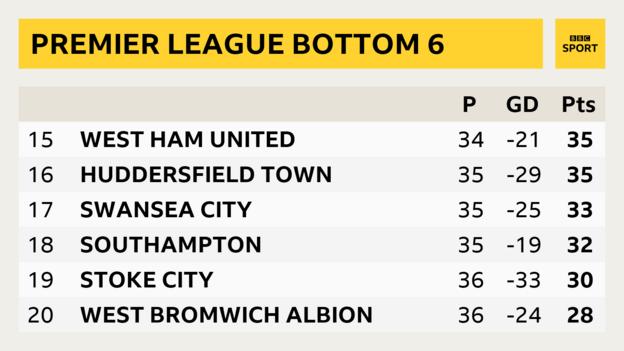 Since taking over from Frank de Boer in September, when the club were bottom of the table with no points and no goals to their name, Hodgson has steadily turned things around at Selhurst Park.

The former England boss has won nine and drawn 11 of his 32 games in charge, and Saturday's performance against Leicester - in particular their first two goals - showed the positive effect the 70-year-old has had on the team.

Zaha was once again a shining light and he opened the scoring, with his fourth goal in as many games, when he thundered the ball into the top of the net from a McArthur back-heel.

The Ivory Coast international returned the favour when he side-footed across the box to McArthur, who swivelled and struck past Hamer.

Palace continued to push for more in the second half and were able to make the extra man count, earning them their biggest win of the season.

Hodgson said after the game: "I am so proud of the players and happy for them. We have not had an easy time.

"We have shot ourselves in the foot at times but to overcome that and keep going it makes me very proud. It is a testament not just to their ability but their character."

Is Puel in trouble?

It could have been a very different story for Leicester had Jamie Vardy pounced on a loose back pass by Mamadou Sakho inside three minutes, but the Foxes striker was denied by the quick reactions of goalkeeper Wayne Hennessey.

The England international then had another first-half chance cleared off the line by Joel Ward, but they were just two of the nine touches he took in the entire game.

Albrighton's sending-off set Leicester back even further and they ran out of substitutes after 50 minutes, as Kelechi Iheanacho and Hamza Choudhury were replaced at half-time, and Wilfred Ndidi was forced off through injury.

Several newspapers have claimed this week that Puel will be let go as part of an overhaul at the King Power Stadium this summer.

Leicester may be tucked safely in mid-table but the manner of this defeat, and their run of four games without a win, means the pressure is on for the Frenchman, who was sacked by Southampton after one season last June.

He refused to be drawn on the speculation after the game, saying: "I pay no attention to it. No comments about it. At the moment it is difficult for my team."

Man of the match - Wilfried Zaha

Zaha in form - the best stats