Mohamed Salah has won the Professional Footballers' Association Player of the Year award for 2017-18.

"It's an honour and especially as it's voted by the players. I am happy and proud," Egypt international Salah said.

"I didn't have my chance at Chelsea. It was clear I would return and show everyone my football. I think I left and came back a different person, man and player."

Liverpool boss Jurgen Klopp said he was "happy to have the opportunity" of being Salah's manager and added it was an "unbelievable honour" to win the award.

"It's been a fantastic ride but we still have games to go," Klopp said. "But please grab the trophy and come home. We play on Tuesday!"

Former West Brom and England forward Cyrille Regis, who died in January at the age of 59, was honoured with the PFA's merit award during the ceremony at the Grosvenor House Hotel in London.

'Everything he touches goes in the net'

Salah has scored 31 goals in 33 Premier League games for Klopp's free-scoring Liverpool side and leads the race for the golden boot.

The Egypt international's 31st league goal against West Brom on Saturday took him alongside Alan Shearer, Cristiano Ronaldo and Luis Suarez, who share the record for a 38-game season.

He scored in both legs of Liverpool's 5-1 aggregate victory over Manchester City in the Champions League quarter-finals, as well as four goals in their league victory over Watford in March.

The £34m summer signing from Roma, is just the fifth player to register more than 40 goal involvements in a single Premier League season (31 goals, nine assists).

Match of the Day pundit Alan Shearer: "Everything he touches seems to go in the back of the net and he is having one of those seasons where you go out on the pitch not hoping you are going to score, but knowing you will. As a striker, I know that it is a great feeling to have."

BBC Sport pundit Rachel Brown-Finnis: "Salah was supposedly over-priced when Liverpool paid £36.9m for him last summer but you could triple that fee and no-one would bat an eyelid - not that they would consider selling him now."

BBC Sport pundit Dion Dublin: "To do what Salah has done in his first season at Liverpool is incredible. He has scored so many goals but he is also unselfish - he will always pick the best option even if that means he doesn't score but the team does."

Why De Bruyne was a close second

Many believed it was a two-horse race between Salah and De Bruyne for the men's Player of the Year award.

He has provided more assists (15) and created more chances (104) than any other player in the Premier League this season, as well as scoring eight goals.

The 26-year-old joined City for a then club record fee of £55m in 2015 and has won one Premier League title and two League Cups.

Manchester City manager Pep Guardiola on why he believed De Bruyne should have won the award: "When you are analysing nine months or 10 months then there was no player better than him.

"In terms of the continuity and playing every three days in all competitions he was there. I am sorry, maybe with numbers, there are numbers guys better than him, but no player in this season with the team who wins [the title] five games before the end, and he was the best.

"I would like to feel that he deserved it. But at the end in summer time we will be at home being champions and for that to happen the players have to play."

BBC Sport readers were asked to select their winner from the six-man shortlist and the Liverpool forward got 76% of the votes.

Coming a distant second was De Bruyne, who took 14% of the votes.

Manchester United goalkeeper De Gea was third with 6%, while Spurs striker Kane picked up 3% of the selections.

De Bruyne's team-mates took up the final two spots, with Silva on 1% and Sane failing to win a single vote.

Five Manchester City players were also named in the PFA team of the year, including De Bruyne and Silva.

Sane missed out on a spot but defenders Nicolas Otamendi and Kyle Walker and striker Sergio Aguero represented the champions.

Five Chelsea Ladies players were named in the PFA Women's Super League 1 team of the year. 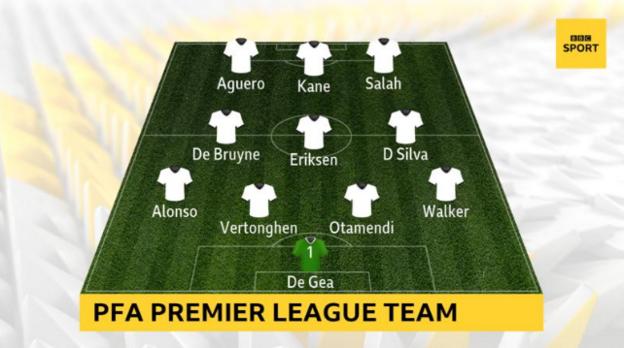 Sane, 22, has scored nine goals and provided 12 assists as part of the title-winning Manchester City side this season.

He is central to Guardiola's attacking blueprint of width, pace and elusive running and has scored important goals in victories against Liverpool and Arsenal this season.

The German international beat Kane to the award as well as City team-mates Ederson and Raheem Sterling.

"I am really honoured to win this award," said Sane. "Thank you to the fans and my team-mates. Congratulations to all the players who played alongside me. They played a good season."

England manager Gareth Southgate was pleased to see four English players nominated for the award and said the country has "exciting players and talent" coming through ahead of the World Cup in Russia.

Kirby, 24, was one of five Chelsea players shortlisted for the Women's Player of the Year award as the club chases the treble this season.

She scored for England against France in the SheBelieves Cup last month and is Chelsea's top scorer this season.

"It is humbling for me," she said. "I have to say a massive thank you to everyone who voted for me. It's good to see people don't mind me scoring against them once in a while!

Bristol City's Hemp, 17, is her club's top scorer this season and has produced a number of exquisite performances in the Women's Super League 1.

The forward was also named England's Young Player of the Year in 2017 after an impressive campaign with the U19s.