Huddersfield Town ensured Premier League survival after a battling draw at Stamford Bridge damaged Chelsea's hopes of playing in next season's Champions League and left Swansea City on the brink of relegation.

The Terriers produced a defensive masterclass to secure the point they needed to stay up and celebrated wildly with their travelling fans after the final whistle.

The Yorkshire side's supporters chanted "We are staying up" as manager David Wagner was given the bumps by his players on the pitch. Meanwhile, Chelsea manager Antonio Conte waited patiently to shake hands and congratulate every Huddersfield player.

After the visitors linked arms and clapped their fans, Wagner said his team would be celebrating all the way back to Huddersfield.

"We have cancelled the flight and will go home by coach," said the German.

The Terriers did not have a shot on goal in the first half but took a surprise lead in the 50th minute when Laurent Depoitre finished Aaron Mooy's ball over the top.

Chelsea dominated possession but were guilty of some poor finishing.

Huddersfield goalkeeper Jonas Lossl produced a wonderful save to push Andreas Christensen's header onto the post as Chelsea searched for a winner, but the Terriers held firm to ensure a second successive season in the Premier League.

Chelsea must now win away at Newcastle on Sunday and hope Liverpool lose at home to Brighton to qualify for the Champions League.

Meanwhile, at the bottom, Swansea must overturn a nine-goal difference on the final day of the season if they are to stay up.

They have to win at home to relegated Stoke and hope Southampton lose heavily at home to champions Manchester City.

One of the season's great success stories

Given they had a run-in against champions Manchester City, Chelsea - both away from home - and Arsenal, few gave Huddersfield much chance of staying up in recent weeks.

However, Wagner's battlers will grace the top-flight again next year after securing an unlikely point for the second successive game.

Having held City to a goalless draw on Sunday, they frustrated the 2016-17 champions on Wednesday.

Wagner's side came with a plan to pack the defence and frustrate the hosts - and they executed it to near-perfection.

Huddersfield were happy to defend deep and allow Chelsea to enjoy most of the possession. 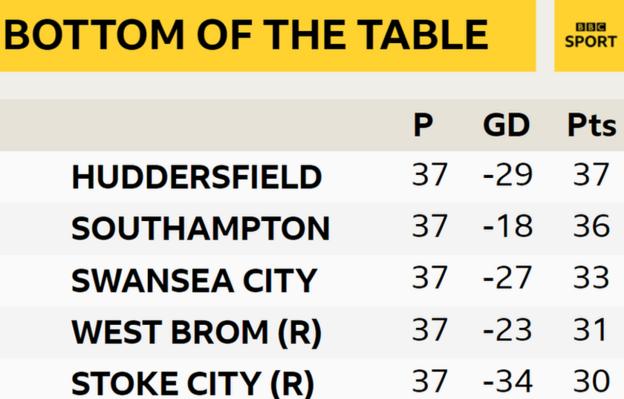 There was a touch of fortune, however, that Chelsea's best two chances fell to Rudiger.

The Germany defender was guilty of an incredible miss from point-blank range in the 13th minute, after Cesar Azpilicueta's downward header from a corner. Rudiger later headed another great opportunity over the bar.

Alvaro Morata rounded Lossl but could not finish while Huddersfield's keeper produced the save of the match from Christensen as the visitors completed one of the great stories of this Premier League season.

What next for Conte?

This could yet prove to be Conte's final game in charge at Stamford Bridge. The Chelsea boss has another year left on his contract but said it was up to the club to "take the best decision" when asked if he will still be in charge next season.

"We have another game to play, the FA Cup final, then the club for sure will do the best to improve the situation," said Conte.

His side brought the curtain down at home with a result which summed up their underwhelming league form.

Having won the title in impressive style 12 months ago, Chelsea's defence of the championship ended long ago.

While they won 51 points from a possible 57 in front of their own fans last term, they managed just 37 this time after a mixed set of results which included an opening weekend defeat to Burnley and a 3-0 loss against Bournemouth on 30 January.

"We dropped many points this season," added Conte. "I'm realistic. I think at the end of the season you finish in the position that you deserve.

"If we stay fifth in the table it means we deserve to stay in this position."

Chelsea dominated Huddersfield but despite ending the match with substitutes Eden Hazard and Olivier Giroud on the pitch, they failed to do enough to beat a gutsy Huddersfield side.

Chelsea's final league game of the season is away to Newcastle United on Sunday (15:00 BST) but they will be back in action on 19 May when they take on Manchester United in the FA Cup final (17:15)

Huddersfield are getting ready for a final-day party at home to Arsenal (15:00) on Sunday.