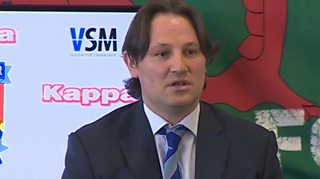 Former Hartlepool United and New Saints manager Craig Harrison is pleased "to be back involved with football" following his appointment as Bangor City boss.

Harrison, who played for Middlesbrough and Crystal Palace, said his job would be to lead the club back into the Welsh Premier League.

Bangor City have been demoted from Welsh football's top-flight after they were refused a domestic licence.