Aston Villa say they have reached an agreement with HM Revenue & Customs over their £4m tax bill.

The Championship side have also confirmed there are no insolvency practitioners or administration advisors working with the club.

Owner Dr Tony Xia said he wanted to reassure fans that plans were being put in place to move the club forward.

Xia has warned of "severe Financial Fair Play challenges" after Villa lost to Fulham in the Championship play-off final last month, costing them at least £160m in revenue.

The 41-year-old Chinese businessman is also understood to have short-term cash flow problems because of strict rules about money leaving his native country.

Villa, who missed a tax payment to HMRC on Friday, have invested heavily in players over the past two years and will receive a reduced Premier League parachute payment of about £15m next term, leading to likely cost-cutting.

Former England captain John Terry has already said he will leave Villa Park at the end of his contract this summer. 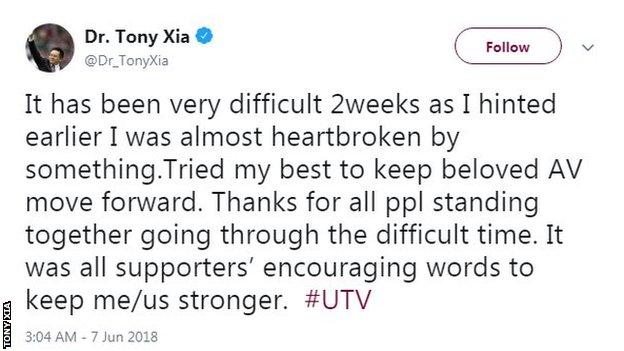 The latest statement is a move to reassure Villa fans that administration is not an immediate prospect and the situation with HMRC has, for the time being, been dealt with. Whilst this may at least be a move in the right direction it would be extremely optimistic to see this as anything other than a short-term measure.

The HMRC problem was the first, but by no means the only, financial fire that needed putting out. The club remains in a frightening financial position and more long-term measures now need to be put in place to ease fears that Aston Villa could be put into administration.

The club says there are "plans are now being put in place to move the club forward" - it's no exaggeration to say these "plans" are the key to the immediate future of Aston Villa Football Club. They simply have to work and they have to be put in place almost immediately.