Marcus Rashford has returned to training, giving England manager Gareth Southgate a full complement of 23 players to choose from for their opening World Cup fixture.

The Manchester United striker suffered a knee injury in practice on Monday.

Rashford, 20, missed training on Wednesday and worked separately from the main group on Thursday.

But he took part in Friday's session as England prepare to begin their campaign against Tunisia on Monday.

He became the youngest player to score on his senior debut for England in May 2016, before making two substitute appearances at Euro 2016.

'We have no fear'

Rashford's Manchester United team-mate Jesse Lingard is also set to play at his first World Cup, with Gareth Southgate having given the 25-year-old forward his England debut in October 2016.

A more experienced squad failed to progress from the group stage in 2014 and at Euro 2016, but Southgate has since ushered in a new generation.

"Gareth has come in with the mentality to play with freedom and without fear, and you will enjoy your time more," said Lingard, who scored his first international goal against the Netherlands in March.

"So as a group of players, that is what we are going to do - enjoy our football, play with no fear and play exciting football at the same time.

"Sometimes that is not the outcome but, on the day, you've got to be a team and work hard, play free and enjoy the football. You are with your team-mates playing football and it is a job you love doing.

"We've been training together for a long time now so the confidence is up. We can't wait to get going and we're excited to make our mark on the World Cup."

What will Southgate's starting XI be? 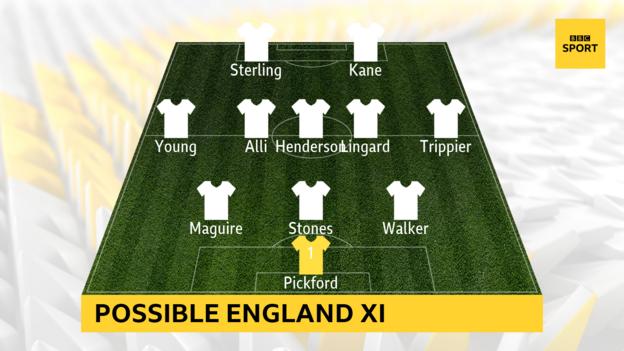 Lingard insisted he had no inkling about Southgate's team for the Tunisia game but Ashley Young appears to be in pole position for the left-back spot ahead of Danny Rose, while there are suggestions Harry Maguire will get the nod over Gary Cahill on the left of England's three-man defence.

Kyle Walker has turned his experimental role on the right side of that system into a starting place and Manchester City colleague John Stones is crucial to Southgate's plans because of his ability to play out from the back.

Dele Alli and Lingard are both now expected to figure after the success of their performance in the win over Nigeria - with the last big decision set to be between Liverpool captain Jordan Henderson and Tottenham's Eric Dier as the holding midfielder.

And the goalkeeping position appears to have been settled since March, with Everton's Jordan Pickford in line to start ahead of Jack Butland in Volgograd.

Rashford's impending return to training only increased the current feel-good factor around the England camp.

The mood is one of relaxed calm and there was further evidence of the Football Association's more open-house policy around this World Cup in Russia.

England have not kicked a ball in anger yet so that mood could swing but the change in approach was evident at their media centre on Thursday.

Cahill took part in the first of a series of darts challenges against the media, beating his opponent in a good-natured contest that ended with a sporting handshake.

And other players involved in media duties - Trent Alexander-Arnold, Kieran Trippier and Lingard - took advantage of the added facilities in the centre at a hotel in Repino, especially the 10-pin bowling alley.

There is also a snooker table, table football, air hockey and a PlayStation with Fifa 2018 to keep media and players occupied.

It all follows on from the great success of the pre-tournament Super Bowl-style media day, when all 23 squad members were made available for interview.