Russia were expected to be one of the worst sides ever to host the World Cup - they've proven a few people wrong.

Coming into the tournament as the lowest-ranked nation and in dismal form, they were the "butt of jokes" and "seemed so hopeless and hapless", according to 5 live's Pat Nevin.

But two games in - a 5-0 win over Saudi Arabia and a 3-1 victory over Egypt - they have had the best start of any host side in World Cup history.

"It is not an accident that we have two wins under our belt, we have a group of solidarity," said coach Stanislav Cherchesov.

'A miracle is needed'

Russia came into the World Cup on the back of seven friendlies without a win, a run dating back to October, and ranked 70th in the world

Confidence was so low that a sports writer with Gazeta.ru said only "a miracle" could save Russia from crashing out at the group stage.

They even had to call 38-year-old centre-back Sergei Ignashevich out of international retirement following several injuries to their back line.

But this is what they have gone on to achieve in just two games:

'They were getting battered - they looked average'

Russia were deserved winners against Egypt, without having to be brilliant. They spotted Egypt's weakness and got it right.

They were the butt of jokes, they seemed so hopeless and hapless. They were getting battered in friendlies, they looked average.

They got a fortunate draw and boy they have ridden their luck. Saudi Arabia are one of the worst teams in the tournament, Egypt with an injured Mohamed Salah, who could barely run, was like having 10 men.

Everything was working in their favour but you have to make use of that. 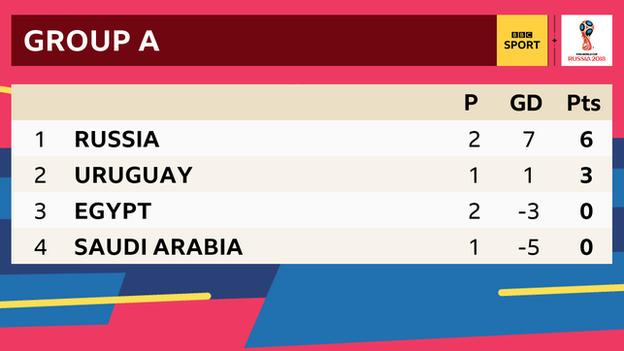 Russia's group could hardly have been easier. They started off against Saudi Arabia, who are - at 67th - the next lowest ranked team in the tournament.

Next up they faced 45th-ranked Egypt, who have now not won in eight games stretching back to October - and have never won a World Cup match. And if Uruguay, ranked 14th in the world, beat Saudi Arabia on Wednesday (16:00 BST), then Russia will be through before having to face a strong side.

Had they lost their opener, it would have been an eighth game without a win - the worst run in Russia's history. Of their eight goals, only two have been scored by players who started the first game.

Denis Cheryshev scored twice against the Saudis, but was only on the pitch after coming on as a substitute following an injury to Alan Dzagoev.

Artem Dzyuba was a tactical switch and also scored in the opening game. Both players kept their places against Egypt and scored again, alongside an own goal.

Cheryshev is a skilful player for Villarreal but his goalscoring start has come as a surprise to everyone. He had only scored two La Liga goals in the previous two seasons - and had never netted in international football, in 11 attempts.

Russia goalkeeper and captain Igor Akinfeev has only faced one shot in the opening two games, Mohamed Salah's penalty for Egypt, which means he has yet to be forced into a save in open play.

So have Russia been good or lucky? The answer is both.