Senegal became the first team in World Cup history to go out on the fair play rule after losing to Colombia.

Egypt, Morocco, Nigeria and Tunisia had already fallen at the group stage.

"Africa is going to be successful one day but we need to think again how we approach these big competitions," said former Ivory Coast striker Drogba.

No team from Africa has advanced beyond the quarter-finals at a World Cup.

However, since 1982 - when Algeria and Cameroon went out at the group stage - at least one country from the continent has made it to the knockout stage. Until now.

In Russia, African teams have managed just three wins and lost 10 in 15 attempts.

"It's a big step back," added Drogba, who scored 65 times in 104 appearances for Ivory Coast, on Match of the Day.

"I also think it is a chance for all the African teams and for the African Confederation maybe to reconsider the strategy and how we want to go forward.

"What do we want to do in the next World Cup? We have the potential, we have the money to develop, but we need more than that.

"We need to have the consistency and the structure of the European teams and the South American teams.

"We are going to be successful one day but we need to think again how we approach these big competitions."

Egypt lost all three Group A games in Russia, while Morocco managed just one point - against Spain - in Group B.

Tunisia lost their opening two Group G matches before beating Panama when both sides had already been eliminated and, although Nigeria beat Iceland, they have also exited the tournament after finishing third in Group D.

Senegal, making their first appearance at the World Cup since reaching the quarter-finalists in 2002, had taken four points from their first two Group H games after beating Poland and drawing with Japan.

The Teranga Lions would have progressed with a draw against Colombia, and defender Kalidou Koulibaly said on the eve of the match in Samara that the "whole of Africa" was behind Senegal. 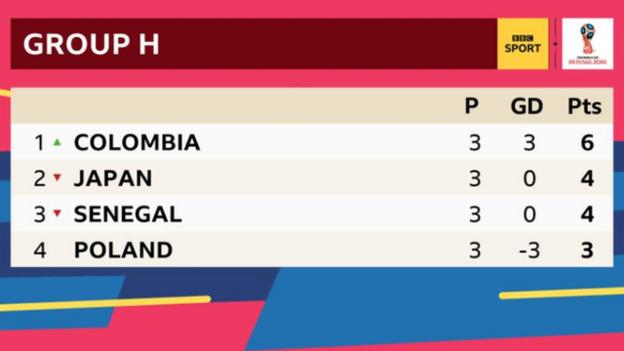 'We didn't deserve to qualify'

"We have not qualified because we did not deserve to qualify," said Senegal boss Aliou Cisse, the former Birmingham City and Portsmouth player.

"Fair play points are one of the rules and these rules have been established in the tournament regulations. We have to respect that.

"We would have preferred to be eliminated in another way but that's the way it works and we knew that those were the regulations.

"I'm just disappointed for my team, for this generation and for these players who fight every single day for our country."