'Stupid', 'negligent', the 'end of an era' - the Spanish media pulled no punches in their assessment of the national team's last-16 exit against Russia.

From the sacking of coach Julen Lopetegui on the eve of the World Cup, to selection errors by interim boss Fernando Hierro and an ageing squad, the media blamed many factors.

A penalty shootout defeat left the 2010 champions stunned. Here, BBC Sport looks at some of the editorials written by a selection of Spain's biggest publications. 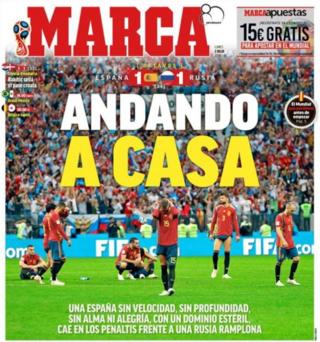 "It began with Florentino Perez, who entered the national team dynamic as a disruptive force, Julen Lopetegui followed by being disloyal and unethical, and then it continued with Luis Rubiales and his quick trigger finger.

"The players finished it off with some negligent performances in key moments of La Roja's four matches, of which they won only one. To think the dismissal of the coach wouldn't bring negative consequences was naive.

"To reduce everything to a poorly executed penalty shootout is a simplistic and cheap summary. The same as loading everything on Fernando Hierro's door."

"If in a World Cup you play with fire, in the end you burn. Spain started the tournament with good football against Portugal, but then it was losing that until reaching the terrible game against Russia.

"Faced with a very poor selection - which defended more withdrawn even than Iran and Morocco - the team of Fernando Hierro showed all the shortcomings that it had already hinted.

"The most serious, without doubt, was the lack of mobility. Mobility is the golden rule of the offensive game. If you do not have mobility, you can spend three hours playing, give a thousand passes, but not generate any occasion.

"Football requires spaces and Spain in its last game, because of the lack of movement, did not find any. Many players should have offered more, but surely that mistake was already the approach."

'They were a broken team' - La Razon

"Akinfeev's foot had just deflected the shot from Iago Aspas and David de Gea started walking towards the locker room. He greeted Doctor Celada and went on his way.

"Meanwhile, the rest of the Spanish players still mourned the defeat in midfield with the thunderous sound of Kalinka in the background.

"Sergio Ramos, crouching, had trouble getting up, Hierro consoled Busquets and Silva hugged Iniesta. They were the most veteran, the world champions, those who seemed most affected, perhaps because they sense that they will not have another opportunity within four years.

"Spain lost on penalties what they had not been able to win in the previous 120 minutes. Aspas failed and Koke had failed before. De Gea sensed several launches from the Russians, but did not stop any.

"The path of a team broken by the dismissal of Lopetegui stood there."

'The Russian exile was not just a bad day' - El Pais

"Spain was so stupid during this stormy World Cup that she ended up condemning herself...

"The team has gone back a decade. In Brazil 2014 it fell to opponents like Holland and Chile. And in France 2016 with Italy. But it has reached a point where it does not stand up against Iran, Morocco, Russia.

"The Russian exile was not a matter of a bad day. Or that a goalkeeper arrived surrendered to the roulette of the penalties (25% of success in his career). Or that Koke and Aspas failed.

"The collapse was from the first day, with Julen Lopetegui, Madrid and the federative command. On the lawn, nobody has been up to the task, with a ramshackle team except for a while with Portugal.

"There was no recognisable player, no matter how much the iron player Fernando Hierro turned the wheel with four different line-ups."