The headline read: 'Neymar has charmed Brazil, but annoyed the whole world'.

That was how Brazilian newspaper Globo put it, capturing some of the mood around a man who once again combined the sublime and ridiculous like perhaps only he can.

Neymar, the world's most expensive player, is arguably the last big global superstar left in this World Cup after exits for Argentina's Lionel Messi and Portugal's Cristiano Ronaldo.

But for all his good performances - and on Monday he was once again vital in Brazil's 2-0 victory over Mexico in the last 16 - there is still a sense that he remains widely unpopular among neutrals.

His contribution was at times brilliant. There were stepovers, jinks into space, the clever backheel that set Brazil moving for the opening goal which he put away himself.

There was also the petulance and the play-acting that, depending on your opinion, is either a cynical way to gain a minor advantage or reprehensible behaviour that erodes the values of football.

It was bizarre to see how the game came to a standstill when Neymar orchestrated a major flashpoint with under 20 minutes to play.

When Mexico full-back Miguel Layun gently stepped on the Brazilian's ankle, Neymar began to wail and writhe as if it was a stamp, waving his arms to communicate great pain.

It sucked everybody in: his team-mates, the Mexico players, the referee, his assistant, the fourth official, everyone became involved as the situation escalated.

I turned to the German journalist next to me and he said: "It's Neymar."

The bottom line for Neymar and Brazil of course is that they are through to the last eight to play Belgium on Friday at 19:00 BST.

And the 26-year-old Paris St-Germain forward was voted Fifa's official man of the match. The winner of that award is always put up for interview.

He was about to reply to a question about the incident with Layun when Brazil manager Tite interrupted and said: "They stepped on him. I saw it on the screen."

Neymar then added: "Look, I think it's more an attempt to undermine me than anything else.

"I don't care much for criticism, or praise, because it can influence your attitude. In the last two matches I didn't talk to the press because I didn't want to.

As for Mexico's manager Juan Carlos Osorio, he said after the game: "It's a shame for all football. It's a negative example for the game, it's a charade."

"He is one of the world's greatest players but when he rolls about on the floor, I just don't get it. Come on young man, you're better than that, get on with the game."

Neymar is clearly one of the world's very best. Just consider some of the stats around his performances so far here in Russia.

At this World Cup so far Neymar has:

By sweeping in the opening goal against Mexico, he scored the sixth World Cup goal of his career.

To reach that total he has required 38 attempts on goal. It took Messi 67 shots and Ronaldo 74 to reach the same tally.

And yet on the BBC Sport player rater, he was awarded the lowest score of anyone on the pitch - 4.76. This despite scoring the opener and playing a big role in setting up the second for Roberto Firmino.

There is so much reaction to Neymar: positive and negative. He has almost 100 million Instagram followers and a post immediately after the match had one million likes within 15 minutes of it being appearing.

But another image has been shared extensively on Twitter since it first surfaced in reaction to Brazil's opening group game, a 1-1 draw with Switzerland in which Neymar reacted to a challenge by rolling dramatically on the floor.

Eight numbered photos of the forward writhing around in apparent agony are accompanied by a caption that reads: How do you feel on the Neymar scale?

Fans of Brazil - and fans of Neymar - will undoubtedly have their own scale by which to judge him. What will matter most to them is his ability to define games on the biggest stages.

Perhaps his temperament is just an unavoidable by-product of his talent, or perhaps it works in symbiosis. 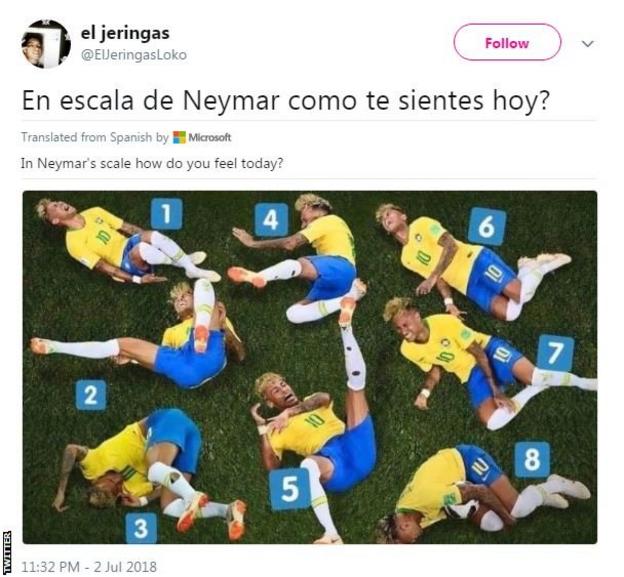 In Brazil's second group match, a 2-0 win over Costa Rica, we saw another bizarre insight into his inner workings. It happened when the referee, trying to defuse some tension, placed his hand on Neymar's arm. Neymar swiped the hand away and appeared to say: "Don't touch me."

After that match, a victory secured by two injury-time goals, including one he scored himself, Neymar was extremely emotional and he broke down in tears.

Was it the stress? The relief? The emotion of having moved closer to the World Cup's latter stages?

Perhaps it was a combination that includes some influence of what happened four years ago, when Brazil were so devastatingly crushed by Germany on home soil in the semi-finals.

Neymar himself was absent from that 7-1 defeat - having been injured by a bad challenge from Juan Camilo Zuniga in a quarter-final victory over Colombia.

That is the round that Brazil have now reached again - for the seventh consecutive tournament they are in the last eight.

What happens next for this team will depend to a large extent on its star player and whether he can find his very best, however he goes about it.