England captain Harry Kane has won the Golden Boot after finishing as the World Cup's top scorer with Croatia's Luka Modric winning the Golden Ball for being the player of the tournament.

Belgium's Thibaut Courtois was awarded the Golden Glove for being the leading goalkeeper.

Former Tottenham midfielder Modric scored in Croatia's opening two matches - a 2-0 win over against Nigeria and then the 3-0 victory against Argentina - and also made one assist as he guided his country to their first World Cup final, which they lost 4-2 against France.

Croatia coach Zlatko Dalic said: "He played a terrific tournament which is another commendation for the team which helped to bring about Luka's success. He did the lion share of our play and he was a deserved winner of the Golden Ball."

Chelsea's Hazard got two goals in the 5-2 win over Tunisia and also scored in his side's 2-0 win versus England in the third-fourth play-off on Saturday.

Atletico Madrid striker Griezmann won the Golden Boot at the 2016 European Championships with six goals and scored four and made a further two at this World Cup.

Paris St-Germain forward Mbappe, 19, enhanced his growing reputation with a series of fine performances that saw him awarded with a silver ball for winning the Young Player Award.

He scored the only goal in France's 1-0 group win against Peru, netted twice in the 4-3 win over Argentina in the last 16 and grabbed France's fourth goal in the final.

Chelsea's Courtois helped Belgium finish third with a number of fine performances in goal to earn the Golden Glove Award. He kept clean sheets in the group win over Panama and the two matches against England and made a number of vital saves in the wins over Japan and Brazil.

A trophy for England

Kane is the second Englishman to end as the top scorer in a World Cup after Gary Lineker scored six goals in 1986.

Mbappe and Griezmann, who both scored in France's 4-2 final win over Croatia, ended on four goals apiece, two behind Kane.

Kane, the Premier League top scorer in two of the past three seasons, also became the first Englishman since Tommy Lawton in 1939 to score in six consecutive internationals, although he did not net in England's last three matches in Russia.

Kane's goals all came in England's first four games, with three from the penalty spot. 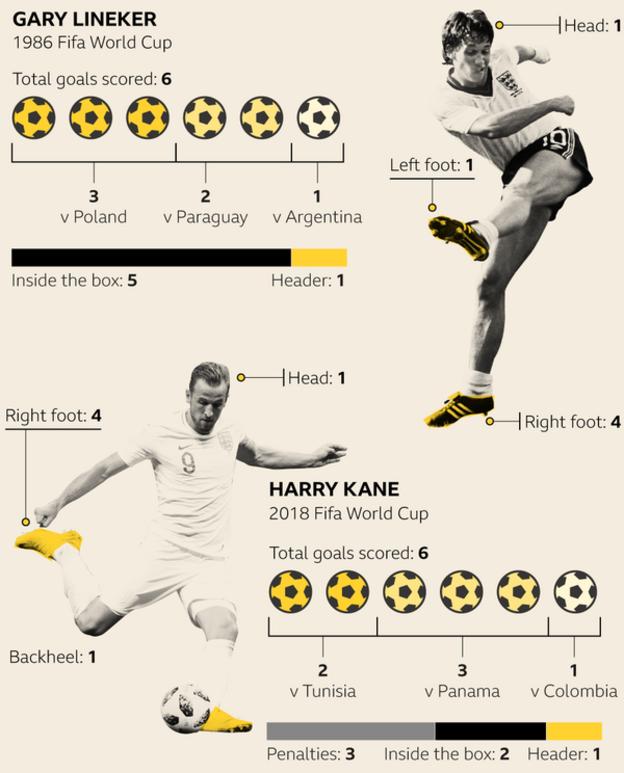 How Kane scored his goals

Only one of Kane's goals came from open play - here is how he scored them all.

Second goal (v Tunisia): Kieran Trippier's corner is flicked on by Harry Maguire and Kane heads in from three yards out.

Third goal (v Panama): From the penalty spot, high into the left-hand corner.

Fifth goal (v Panama): Kane's only goal from open play. Ruben Loftus-Cheek's low strike deflects off his heel and sails into the net.

Sixth goal (v Colombia): Another from the penalty spot, straight down the middle.

The numbers behind Kane's goals

How does Kane compare to rivals? 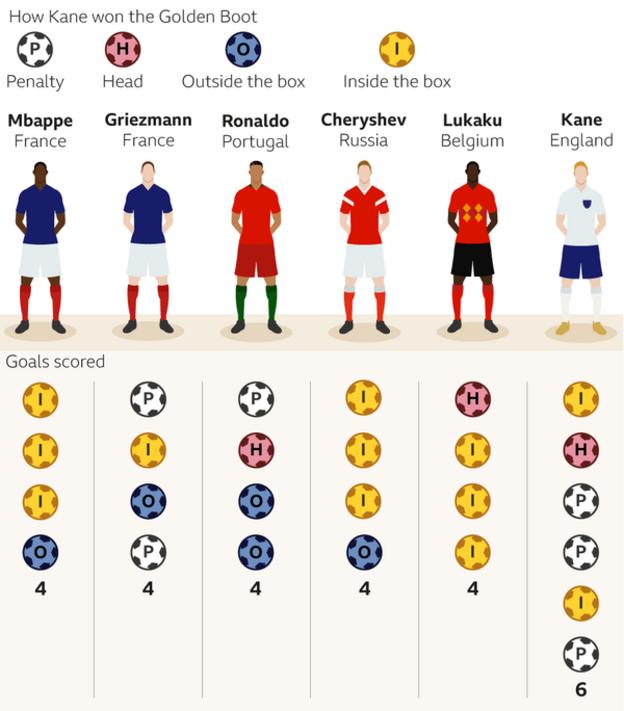 And what about past winners?

The Golden Boot was first awarded at the 2010 World Cup. From 1982 to 2006, it was the Golden Shoe and before that players were just recognised as the top goalscorer at the tournament without there being any formal award.

Kane's six goals would have given him a share of the Golden Boot (or its equivalent) in 11 of the previous 20 World Cup tournaments.

Since 1978, only one player has scored more than six goals in a single tournament, Ronaldo firing Brazil to victory in South Korea and Japan in 2002 with eight goals - the record tally for a player at a 32-team World Cup, as the below table illustrates... 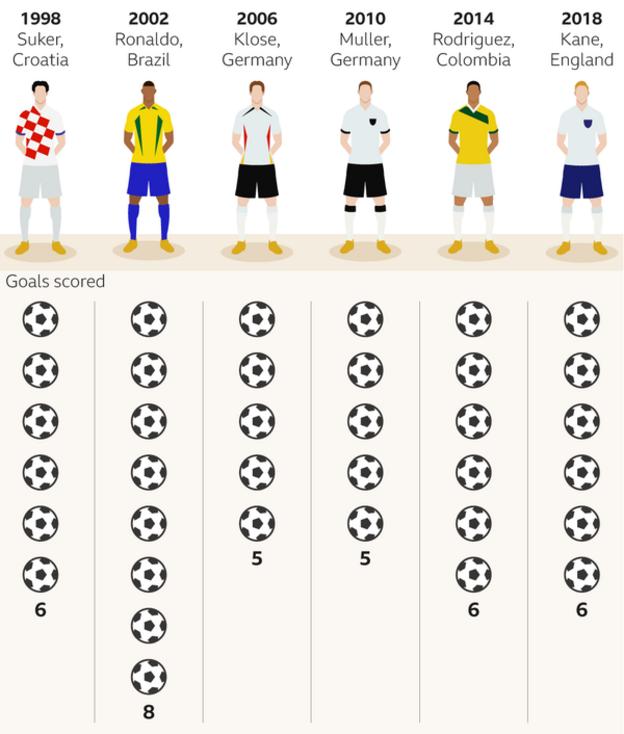 Despite being the top goalscorer in Russia, Kane still finished seven goals short of the tally set by France's Just Fontaine in Sweden in 1958.

The below table illustrates the number of goals scored by each top scorer at a World Cup, all the way back to the first in 1930.

What does winning the Golden Boot mean for a player?

In short - kudos, prestige and the opportunity to further your career at one of the biggest clubs in world football.

Here is what winning the prize has done for the career of a selection of players...

Lineker was already a big fish in the then First Division after joining champions Everton for a club record £800,000 fee in 1985 and scoring 40 goals in 57 games on Merseyside.

But the 1986 World Cup in Mexico saw a dream move to Barcelona materialise for £2.8m.

Back in 1994, Russia's Salenko was little known away from his club, Spanish side Logrones, but his six goals in the finals in the USA ensured a tie for the Golden Boot with Bulgaria's Hristo Stoichkov.

He stands alone in World Cup history for scoring five goals in a game, while also being the only player to finish top scorer after his country failed to get out of the group stages.

His record-breaking exploits earned Salenko a post-tournament switch to Valencia.

Ronaldo recovered from a series of knee problems to score eight goals, including two in the final against Germany, as Brazil won their fifth World Cup in 2002.

Widely regarded as the best forward in the world at the time, he moved from Inter Milan to Real Madrid that summer and his second Ballon d'Or followed later that year.

Monaco's attacking midfielder Rodriguez announced himself on the world scene at the 2014 tournament in Brazil, scoring six times in five games to help Colombia to the quarter-finals.

His efforts saw him eclipse Germany's Thomas Muller and home favourite Neymar in the race for the Golden Boot, paving the way for a £71m move from Monaco to Real Madrid.