Salford City co-owner Gary Neville has been accused of trying to "steal" an English Football League spot by Accrington Stanley owner Andy Holt in a row between the pair on social media.

The Irishman, 30, will earn a reported £4,000-a-week at the non-league club after moving for an undisclosed fee.

When asked whose EFL place Neville's side would be "stealing", the former England and Manchester United right-back replied: "Steal! I hope it's yours now! We've invested millions.

"You seem to want a franchise league where the established can't be challenged! We put a lot of money in and aren't embarrassed about it."

Holt, whose Accrington side won League Two last season, called for "an absolute cap on squad spending" and accused Salford of "buying their way in".

He also appeared to reveal that Stanley were operating on a £1.1m budget.

Salford were promoted to the fifth tier for their first time in their history in April.

Owned by a group of ex-United players including Ryan Giggs and Neville, they have been promoted three times in four years and appointed ex-Scunthorpe boss Graham Alexander as their new manager in May. 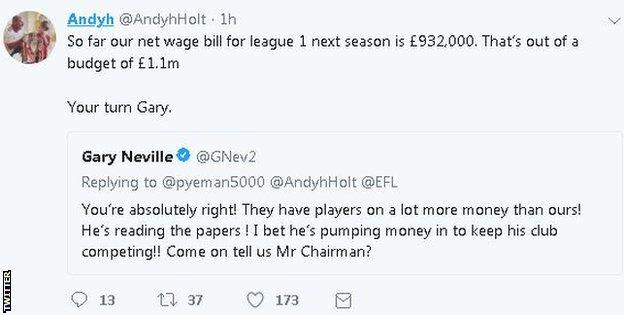