Arsenal midfielder Mesut Ozil has quit international football, citing the "racism and disrespect" he has faced in Germany over his Turkish roots.

The 29-year-old was criticised after being photographed with Turkish president Recep Tayyip Erdogan at a London event in May.

He says he received hate mail and threats and was being blamed for Germany's disappointing World Cup.

"I am German when we win, but I am an immigrant when we lose," Ozil said.

German football chiefs have yet to respond to Ozil's claims.

However Chancellor Angela Merkel "respects" his decision as he has done much for the national side, her spokesperson said on Monday.

The third-generation Turkish-German was born in Gelsenkirchen and was a key member of his country's 2014 World Cup-winning side.

He has 92 caps and has been voted the national team's player of the year five times since 2011 by fans.

However, the team failed to get beyond the group stages of the recent World Cup in Russia, despite being one of the favourites.

Ozil said his recent treatment made him "no longer want to wear the German national team shirt".

In a lengthy statement posted on social media, he said he did not feel accepted in German society despite paying taxes, donating to good causes there, and being a World Cup winner.

Germany's football association, the DFB, was among those to criticise Ozil after he had his photograph taken with Erdogan.

"It is with a heavy heart and after much consideration that because of recent events, I will no longer be playing for Germany at international level while I have this feeling of racism and disrespect," the player said.

"I used to wear the German shirt with such pride and excitement, but now I don't. I feel unwanted and think that what I have achieved since my international debut in 2009 has been forgotten."

Ozil met Erdogan in May along with fellow Germany international Ilkay Gundogan, the Manchester City player who is also of Turkish descent. Ozil says he and Gundogan talked about football with the president.

Afterwards, photographs were released by Turkey's governing AK Party in the build-up to elections in the country, which Erdogan won outright.

Gundogan later issued a statement in which he said he "honours German values 100%" and never intended the picture to be seen as a show of political support.

The players did meet the German FA president to explain the image, although Ozil had not issued a public statement on the matter until Sunday.

He pointed out that Erdogan also met the Queen and Prime Minister Theresa May while in England and said he would have been "disrespecting his ancestors' roots" had he not posed for photographs with the Turkish president.

"It wasn't about politics or elections, it was about me respecting the highest office of my family's country," he added.

A wider social issue for Germany?

Germany is home to about three million people of Turkish descent - a point regularly raised in political debate in the country, where immigration and the rise of far-right parties are key issues for many.

And Ozil questions in his statement why other dual-heritage team-mates have not been subjected to the same treatment.

But Thomas Bareiss, a senior member of Chancellor Angela Merkel's Christian Democrats, said it showed "disrespect" and was "misplaced", while German daily Bild said Ozil was "revelling in the victim role that has nothing to do with reality".

Stephan Mayer, state secretary in the German Interior Ministry, told BBC Radio 4's Today programme Ozil was "naive" for thinking the picture was not political given it was just weeks before an election. However he said the matter had been allowed to drag on much too long and had been poorly managed.

Members of Erdogan's government in Turkey, meanwhile, have shown support. "I congratulate Mesut Ozil who by leaving the national team has scored the most beautiful goal against the virus of fascism," Justice Minister Abdulhamit Gul said.

And the country's sports minister, Mehmet Kasapoglu, said the player had taken an "honourable stance".

Fellow players have their say... 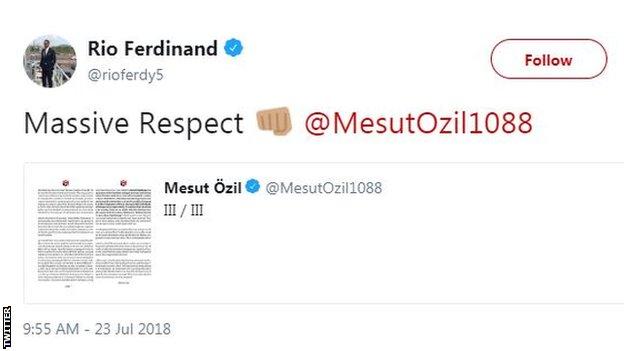 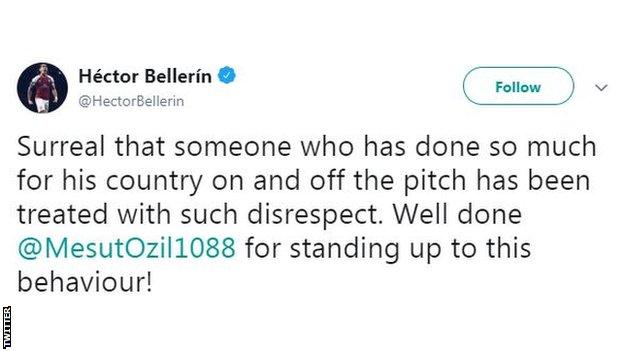 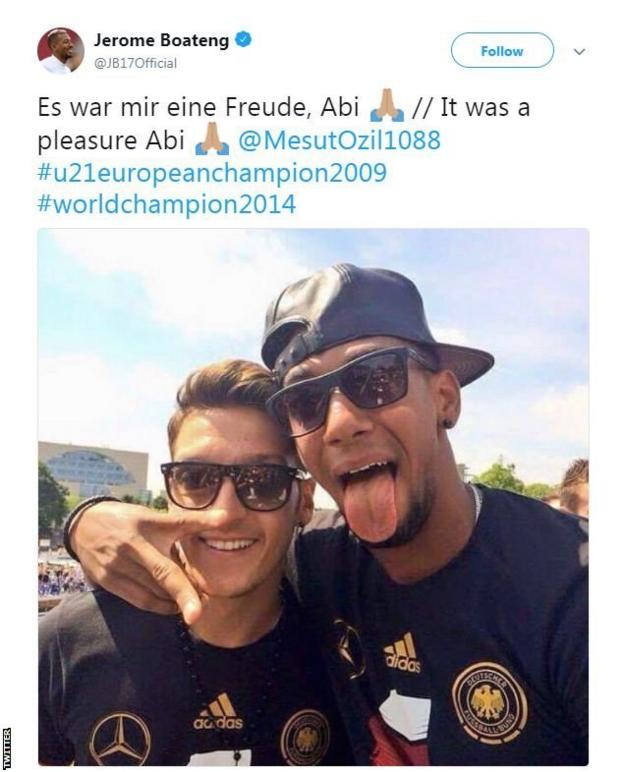 I think the lack of backing he's been receiving from the German FA in the wake of the scapegoating he's been subjected to in sections of the German media, but also on social media, and the fact the most technically gifted player of his generation feels he can no longer represent Germany while he feels subjected to racism, makes it a very painful day for German football on the whole.