Rangers have one foot in the Europa League group stage after a solitary goal gave them victory over Ufa at Ibrox in their play-off first leg.

Rangers could have extended their lead but had to settle for a single-goal advantage to take to Ufa next Thursday.

Kyle Lafferty was brought on just a day after signing from Hearts for an undisclosed fee but the Northern Ireland international could not find the second goal the Ibrox side's pressure merited.

If Rangers hold their nerve in the Neftyanik Stadium, it will be the first time the Scottish Premiership side have reached the group stage of a European competition since the 2010-11 Champions League.

This win brought up Gerrard's 10th competitive match in charge of the Scottish Premiership side and his 10th without defeat.

His first victory came six weeks ago as Rangers beat Macedonia's Shkupi 2-0 at Ibrox to start their Europa League journey.

But despite that success, not many of Rangers fans present that night would have expected the former Liverpool captain to be just 90 minutes away from a potential Europa League group-stage spot.

The key to his success can be seen all over the park. Goalkeeper McGregor has helped bring a stability and six clean sheets, with the veteran Scotland international reacting superbly to block Zhivoglyadov from point-blank range on Thursday.

Goldson's influence at both ends of the park is also clear to see. The former Brighton and Hove Albion centre-half, 25, has been a rock at the back.

However, it was his predatory instincts against the Russians that proved pivotal as he pounced on a fumbled Aleksandr Belenov save from an Alfredo Morelos header to scramble the ball into the net.

With Morelos having scored five goals in his last four games, and Lafferty burnishing his attacking options, Gerrard will feel confident that Rangers can cause further problems in Ufa next week. 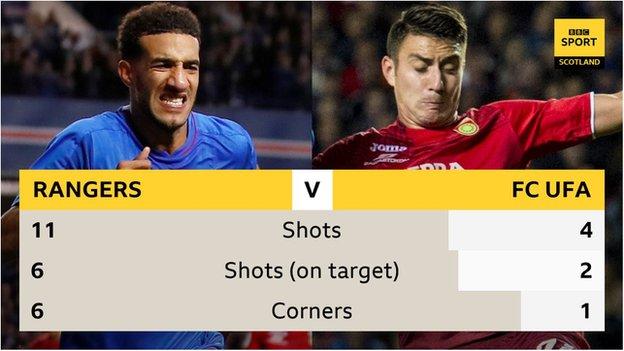 It's a decent result. Obviously they would have liked another goal to make it more comfortable, especially with Ufa being a bit of a unknown and the long journey to Russia.

But generally Rangers' performances under Steven Gerrard, especially away in Europe, have been defensively sound. That result was their fifth clean sheet in Europe, which is an amazing feat.

I don't expect them to struggle in Ufa given the quality of the opposition. The one thing they have right now is real momentum. They are building belief and confidence.