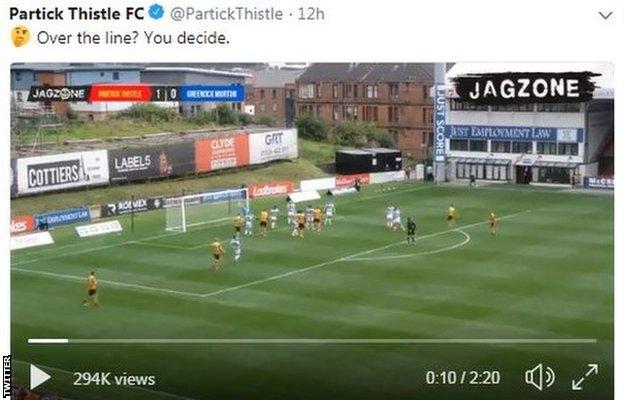 Twenty-five years ago, referee Les Mottram failed to spot an obvious goal against Partick Thistle at Firhill. But on Saturday, in the same goalmouth, Thistle were the victims of a similarly strange decision.

Kris Doolan's shot from the edge of the Morton box glanced off the underside of the crossbar and rippled the net, before falling across the goalline.

As the home players celebrated, referee Barry Cook consulted with his assistant and opted to award a throw-in instead.

Thistle manager Alan Archibald described it as "bizarre" and "unbelievable" but, fortunately for Thistle, Chris Erskine's goal was enough to earn them victory regardless.

"I'm just glad it didn't have an effect on the outcome," said Archibald.

"The referee could have overruled [the assistant], and the other assistant can see it and just say, 'the linesman has had a bit of a bad day there, can we help him out?'

"I'm only calm because we've won the game, but it beggars belief."

It was reminiscent of the incident at Firhill in January 1993 when a shot by Dundee United's Paddy Connolly hit the stanchion of the same goal, bounced out, and was caught by Thistle defender Martin Clark and thrown back to goalkeeper Andy Murdoch, only for Mottram to wave play on.