Midfielder Kim Little says Scotland must be "very aggressive" if they are to win their crucial Women's World Cup qualifier against Switzerland.

If Scotland beat the Group D leaders by two goals on Thursday and win in Albania on 4 September they will progress as group winners.

"We need to be more positive in the way we play," she told BBC Scotland.

Shelley Kerr's side suffered their only setback of the campaign with a 1-0 defeat against Switzerland in April.

"That performance was very disappointing on a whole," said Little. "We conceded a very sloppy goal and didn't create enough chances.

"Travelling adds an extra obstacle so being in a comfortable environment will help."

Scotland are second in the group, three points behind Switzerland.

The seven group winners will qualify for the World Cup, while the top four of runners-up enter the play-offs for the final spot.

"They've played in a major tournament [Canada 2015 World Cup] but so have some of our girls too with the Euros last year," said Little.

"It's a one-off game and we definitely have the team and ability to beat them."

The Arsenal trio of Little, Lisa Evans and Emma Mitchell play alongside Switzerland midfielder Lia Walti, who signed for the Women's Super League side this summer.

"It's inevitable when you play internationals that you'll come up against team-mates," said Little, who has scored 49 goals in 125 games for Scotland.

"But on both sides it'll be completely professional and we'll be ready to do our job on the day.

"Most of us are pretty relaxed. We've been absorbed in our club environments to get ourselves in the best shape for the season ahead, which can only help for these two games." 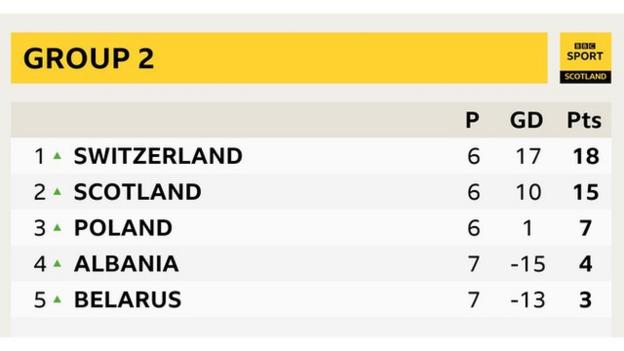