Brendan Rodgers said Allan McGregor kept Rangers in the Old Firm derby. Steven Gerrard said the goalkeeper was lucky not to be sent off. Both could well be right.

The Scotland international made a series of terrific saves to keep the game level before Celtic's Olivier Ntcham finally beat him just after the hour. But should he have still been on the pitch after appearing to kick out at Kristoffer Ajer?

Here, BBC Scotland looks at the good, the bad, and the ugly of McGregor's performance.

And there is no doubt that McGregor kept Rangers in the game, especially while his side were under siege in the first half.

Callum McGregor was thwarted three times and Olivier Ntcham twice by the Scotland international, who also spectacularly pushed a Odsonne Edouard header away.

All told, he added several pages to his bulging Old Firm scrapbook in his second derby debut...

Time-wasting with 40 minutes left? - the bad

Over his long career, McGregor has been no stranger to a yellow card.

He picked up five last season alone playing for Hull City and was described during Sunday's Old Firm encounter as one who "always tries to leave a wee bit on you" by former Rangers team-mate Billy Dodds.

And 50 minutes into this derby, he was booked by Willie Collum. For timewasting. Five minutes into the second half. Little wonder he looks bemused... 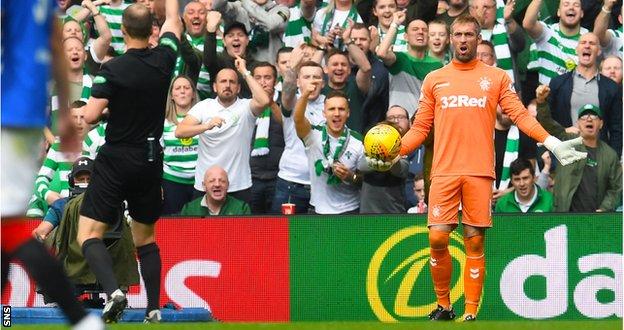 Facing a ban? - the ugly

Clare Whyte, the Scottish FA's new compliance officer, started work last week and there's every chance McGregor's name will be one of the first across her desk on Monday morning.

The 36-year-old came out to clear a devilish free kick and was clattered into by Celtic defender Ajer. The pair fell to the floor and legs flailed. One leg in particular. One belonging to McGregor.

Willie Miller accused Ajer of being "a little bit naughty" by raising his boot in the challenge but insisted that McGregor should have been sent off regardless for "lashing out like that".

Even Rangers manager Steven Gerrard described it as "blatant" and said he will speak to the goalkeeper. He might not be the only one...

Should the compliance officer decide the incident is worth further investigation, she will ask three former category one referees if it merited a red card. If they all agree it does, a notice of complaint will be issued and a suspension handed down