The Scots are level on points with group leaders Switzerland going into the final round of qualifiers.

The Swiss will progress if they win in Poland, while three points for Scotland will take them into a play-off.

"It's a different kind of challenge," said Kerr, whose side beat the Swiss 2-1 at home last week.

"There's even more pressure in some respects to win this one away because you're playing a team lower ranked than you, so pressure becomes different."

Scotland raced into a 2-0 lead against Switzerland inside five minutes, knowing a two-goal margin of victory would take them top.

However, the final score in Paisley leaves Kerr's side needing the leaders to slip up.

"There will be other people looking at the Poland game, but for me I'll be concentrating on our own team to try and get a positive result to end the campaign," said Kerr.

"Let's focus on winning the game and what will be will be."

Albania are fourth in the group with five defeats from seven outings, including a 5-0 thumping in Scotland.

"We're in a good position and we want to finish off in good style but it's not going to be easy," added Kerr.

"They minimise space, they won't be as open and fluid as the Swiss so we know that we're going to have to be patient and have more than one, two, three or four ways to break them down.

"Thursday was a huge turning point for us, to beat a higher ranked opposition when it matters, that's a huge thing psychologically.

"The players couldn't have given any more against Switzerland and I thought we were the better team.

"There's been massive strides made and huge improvements - but there's still more to come from us."

The play-off will involve the four best second-placed teams from seven groups competing for one remaining European place at France 2019.

Scotland 'will go for it' - Analysis

I think they will go for it. They will be confident they have the ability to get more than one goal against Albania - they didn't cause us many problems in the previous game.

I think Shelley will set up a pretty attacking team and try to get early goals to take the pressure off the rest of the game. First and foremost they need to beat Albania to make sure that if Poland were to do Scotland a favour, we haven't slipped up.

Switzerland are a very strong side with some class players but in last week's game, Scotland were excellent. We really showed the quality we have in our side both defending and attacking.

That will have done a world of good for the Scotland players in terms of their confidence, even if they go forward to the play-offs, where they will face top opposition of a similar standard to Switzerland. So it will stand them in really good stead for those games. 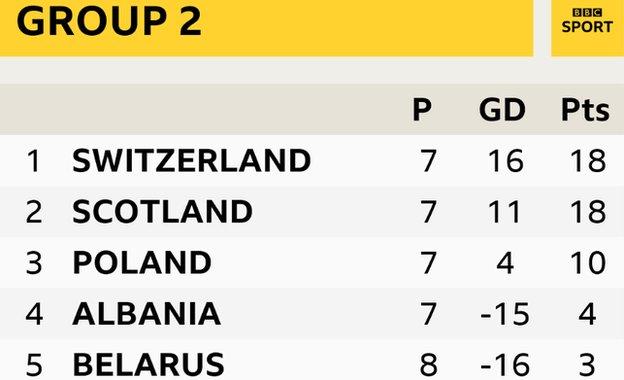