Another week, another round of Premiership fixtures dripping in drama.

Brendan Rodgers' side made sure their manager would have to wait to sample defeat against Rangers with a 1-0 win at Celtic Park on Sunday. The Premiership champions moved up to second in the table as a result, with Rangers remaining in seventh with four games played.

At both ends of the table it was business as usual. League leaders Hearts romped to a 4-1 victory over St Mirren to stay top of the Premiership with a 100% record, while Dundee's home reverse to Motherwell means they have still to register a point.

But who were the standout players from another enthralling weekend? BBC Scotland commentator Rob Maclean picks his team of the week... 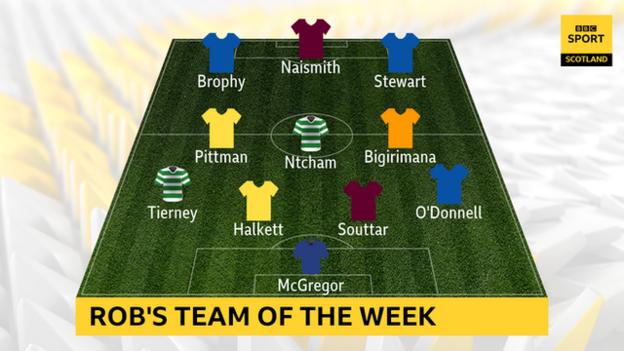 The Rangers goalkeeper was lucky to avoid a red card for what appeared to be a kick out at Celtic's Kristoffer Ajer, but went on to produce a stunning goalkeeping performance with a string of impressive saves.

Kilmarnock defender Stephen O'Donnell has had international recognition in the summer. At last he's not an unsung hero anymore. In the 2-0 victory over Aberdeen he was solid at right-back and this season has rarely been less than a seven out of 10.

Due to Hearts captain Christophe Berra's injury keeping him out for over half the season, some would have feared the early momentum with the Tynecastle side would fade away. However, at the back John Souttar has taken on much more defensive responsibility in Berra's absence. He has thoroughly deserved his call-up to the Scotland squad and was another standout in Saturday's win over St Mirren.

Livingston's Craig Halkett marshals a back three who just love defending. He's played a major role in the back-to-back wins over St Mirren and now Hibernian since Gary Holt took over as manager.

Celtic left-back Kieran Tierney turned in a performance against Rangers on Sunday that has become typical of him over the past few years. The Ibrox side tried teaming up two players to stop his marauding runs down the left and still failed. In the first half he was allowed to rampage forward at will. Put on his Sunday best.

Scott Pittman has been a big driving force in the rise of Livingston and is clearly relishing the step up to the Premiership. The midfielder hammered home Saturday's winner against Hibs and was a standout performer for the West Lothian side.

Moussa Dembele grabbed the transfer deadline day headlines but it was another 22-year-old Frenchman who delivered an Old Firm midfield master class to confirm his massive potential. Keeping hold of Olivier Ntcham has been massive for Celtic and it was his run forward and cool finish that decided Sunday's result against Rangers.

Gael Bigirimana was a bit part player in Stephen Robinson's Motherwell squad last season. The Burundi international started just 15 games for the Fir Park side last term. But he's transformed himself into an automatic pick this time around and was a big influence in the weekend win at Dundee. His free-kick put Motherwell into a two-goal lead, while his quick thinking and pass for Allan Campbell put the result to bed.

Greg Stewart came back to haunt his former Aberdeen team-mates with a brilliantly taken goal on Saturday to remind everyone of his undoubted talent. The forward struggled to make a big impact at Pittodrie while on loan last season from Birmingham City, but his Kilmarnock debut will live long in the memory of the travelling support as his meandering run was finished with a stunning chip over Joe Lewis.

Another member of Kilmarnock's winning side against Aberdeen, Eamonn Brophy, scored superbly from a free-kick. He also smacked the crossbar and forced a series of saves from Aberdeen goalkeeper Lewis. The former Hamilton Academical man has turned into a big threat for the Rugby Park side.

The Kilmarnock trio is complete this week with former Rugby Park striker Steven Naismith. He was Saturday's hat-trick hero for Hearts in the 4-1 win over St Mirren, and he also set up the Tynecastle club's other goal. That's seven strikes this season already for the 31-year-old. A Scotland recall has surely not come as a surprise.