A flag which pays tribute to former Newcastle United goalkeeper Pavel Srnicek has been returned.

The flag, displaying the 'Pavel is a Geordie' chant, was taken after Newcastle's 2-1 defeat by Chelsea in the Premier League in August.

Harper, now an academy coach at Newcastle, wrote on Twitter: "Could whoever has taken the 'Pavel is a Geordie' flag please return it ASAP.

"The big man meant so much to so many people and it's only fitting he's remembered whenever NUFC play."

In his first spell, Srnicek helped Newcastle win promotion to the Premier League and was an integral part of the squad that came close to winning the title under manager Kevin Keegan in 1996.

Srnicek, who also played for Sheffield Wednesday, Portsmouth and West Ham, returned to Newcastle on a season-long deal in September 2006 but was released in May 2007. 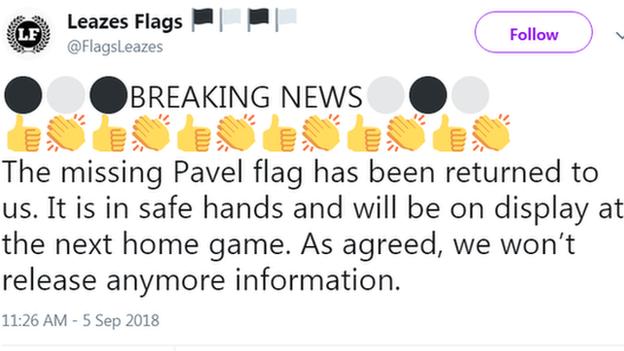