Until Thursday evening, Wales faced the prospect of playing a much-weakened Denmark team when the countries play in the Nations League in Aarhus on Sunday.

Denmark's senior players had refused to sign a new national team agreement with the Danish Football Association (DBU), but an agreement has been reached to put the dispute aside temporarily for the Nations League match.

As a consequence the original squad, including Tottenham midfielder Christian Eriksen and Kasper Schmeichel of Leicester City, will now be available to face Wales.

However, the DBU were forced to select third tier, fourth tier and futsal players for their 3-0 friendly defeat against Slovakia just days before they were due to play Wales - a team of 'unknowns'.

'Not on a Saturday'

Wales themselves faced a similar situation 88 years ago when they were forced to field a much-weakened side made up of lower-league players.

"Billy Meredith, one of the best players of his generation, played for Wales over a quarter of a century and racked up nearly 50 caps.

"But he could actually have won many more caps for Wales during that period had he not been stopped by his clubs from appearing in a Welsh shirt."

The situation took another turn in 1930 with the introduction of a 'not on a Saturday' rule.

The English Football League took specific steps to stop clubs from releasing players to play internationals if they were held on the same day as a full programme of league games.

That was a move to try and force international games to be moved to midweek rather than on weekends, which the international teams opposed as they didn't attract big gates.

"When the rule came in in 1930 it hit the Welsh team especially very hard," said Emrys, who will be in Aarhus for Wales' game on Sunday.

"Most of the leading Welsh players played in the English league.

"And when the game against Scotland took place on a Saturday in October 1930, Wales were left without any of their main players except for a couple of Cardiff players who secured their release.

"Scotland weren't really affected by the rule because of the Scottish League and they could still field players from teams like Celtic and Rangers."

Fred Keenor, Cardiff City's FA Cup winning captain of 1927, led a Wales team which was primarily made up of either lower league or Welsh league players.

Colwyn Bay's John Neal, Fred Dewey of Cardiff Corinthians, Llanelli's Elvet Collins and Emrys Ellis of amateur London club Nunhead were among the unfamiliar names in a side which was expected to suffer a heavy defeat. 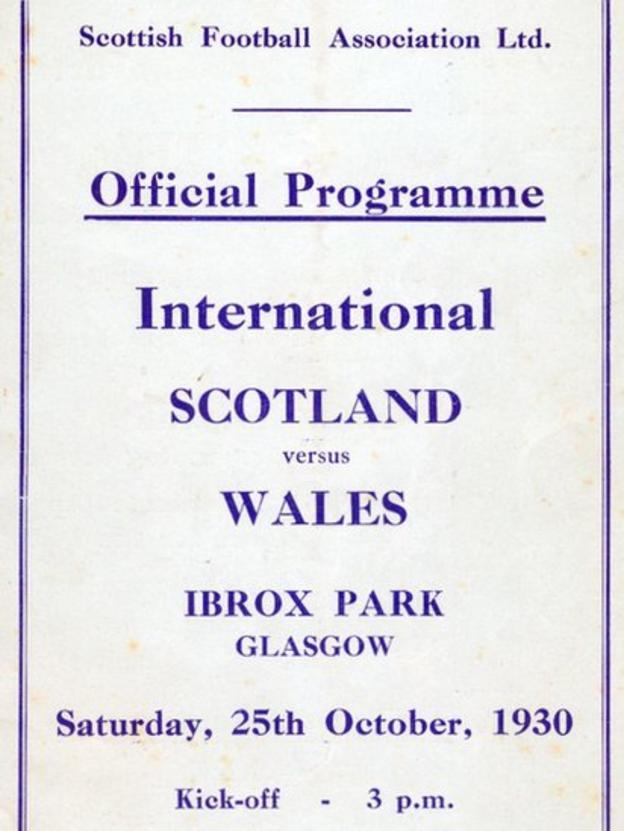 Nine of the Welsh players were making their debuts that day and were referred to as 'Fred Keenor and 10 unknowns'.

"Apparently he [Keenor] sat down with the team before the match and memorably said, 'We have 11 players, they have 11 players - there's one ball out there and that ball is ours,'" Emrys added.

"It obviously worked and gave them the confidence to get a 1-1 draw."

Wrexham's Tom Bamford gave the visitors an early lead in the British Championship game only for Barney Battles to equalise for the Scots.

"To go up to Scotland and get that draw was quite a result, especially considering that in the previous few seasons Scotland had beaten Wales on both occasions," said Emrys.

Wales' efforts at Ibrox was described by the Scots as "the pluckiest display in the history of international football".

Public demand insisted the unknowns were given another opportunity the following month against England at the Racecourse in Wrexham.

"All but one of those who played up in Scotland faced England, but unfortunately it didn't work out quite as well on that occasion because they lost 4-0," said Emrys.

"The game against England in 1930 was the last time until 2008 that any non-league players were selected for Wales."

On that occasion in 2007, Steve Evans of Wrexham faced Russia for Wales in a 2-1 World Cup qualifier defeat.