England Under-21s kept control of European Championship qualifying Group 4 but were left frustrated after being held to a goalless draw by Netherlands.

Aidy Boothroyd's side had the greater number of clear-cut chances at Carrow Road but failed to make them count.

The draw preserves England's unbeaten status in qualifying and their five-point advantage over the Dutch.

With three games remaining, the first of which is in Latvia on Tuesday, Boothroyd's side are favourites to go through to the Euro finals in Italy next June.

The Netherlands' failure to win gives encouragement to Scotland, who are now just a point behind the Dutch following a 3-0 win over Andorra on Thursday.

Both teams in Norwich looked good going forward, but neither were assured at the back, with England struggling to fully get to grips with an initial 3-4-3 formation that mirrored the senior side to the extent that one third of the back-line was comprised of an attacking full-back in Leicester's Ben Chilwell. 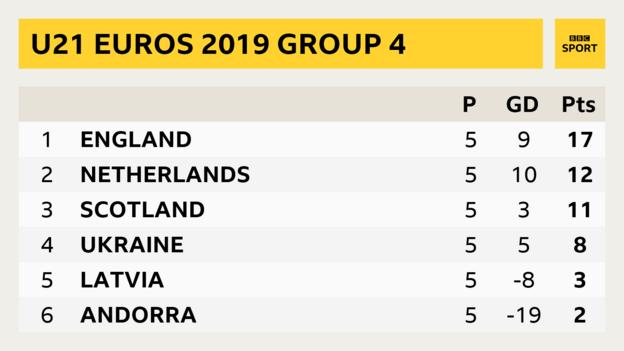 They would revert to a more familiar and robust back four after 30 minutes but before this early teething problems saw the Netherlands find acres of space in the box, with only Guus Til's wildly-high shot saving the home side.

At the other end, Everton forward Calvert-Lewin, Gray and the latter's Leicester team-mate James Maddison were particularly lively.

The first spurned two chances within the opening two minutes - the second the best of them when he was clear through on goal - as both were saved by Justin Bijlow.

Maddison, returning to Carrow Road for the first time since his summer move from Norwich to Leicester, was England's chief creative force for the 75 minutes he was on the pitch and it was only down to some disciplined Dutch defending that he was unable to find the space he needed.

Gray brought his superb Premier League form into the game with a number of driving runs down the right and by fizzing, dangerous crosses into the middle. He was a yard away from opening the scoring with a deflected shot from 25 yards early in the second half.

He went even closer later in the half when he cut inside from the left before unleashing an effort from just inside the box that came back off the woodwork.

View all Euro U21 Qualifying results