Friday's 4-0 friendly defeat by Belgium was their worst at home in 45 years.

McLeish says his players are "angry with themselves" and that there must "be a reaction" against Albania, who beat Israel 1-0 in their group opener.

"There's nothing like a motivated individual going into a huge game," he told BBC Radio Scotland.

Scotland have lost four of their five matches in McLeish's second spell in charge, scoring just once in the time and Friday's game at Hampden Park was further marred when striker Leigh Griffiths was withdrawn at the break.

However, McLeish is confident the Celtic forward will be fit to face the Albanians.

"I think he's going to be OK - he had some wee ankle problems and had to change his boots," he said. "There was a wee bit of disruption and I thought: 'I'm not going to take any chances.'

"He did want to stay on and said to give him 15 minutes but I said to leave it as he seemed in a wee bit of distress before half-time."

McLeish says he is minded to make changes both to his personnel and to Scotland's formation for Monday's game - the first competitive outing of his second spell in charge.

The Scots deployed a back three against Belgium, with Griffiths alone in attack, but the manager told Sportsound he is "certainly thinking of other players and about the system we're going to deploy".

One change might be in goal, where Rangers' Allan McGregor could replace Celtic counterpart Craig Gordon, with McLeish adding that neither was "throwing their dummies out of the pram… as yet".

Three of the four goals conceded against the Belgians were down to horrible defensive errors as Scotland persisted in their attempts to play the ball out of the back.

John McGinn and Ryan Jack were caught in possession for two of the goals, and Charlie Mulgrew conceded possession in the run-up to another, but McLeish insists he is committed to a passing game.

"We've tried the other way for the last 20-odd years - parking the bus, as it were - and just hitting the long ball," he said. "But we don't even have big strikers now, apart from Oli McBurnie.

"The focal point for France at the World Cup was Olivier Giroud - a guy who didn't score in the tournament - but he was a focal point for the other players to work off. We don't really have a player like that." 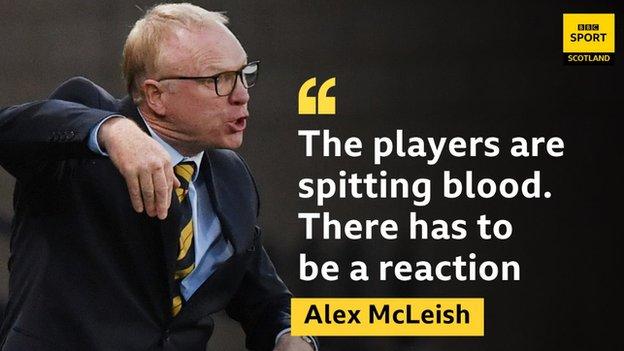