Elsewhere, Bournemouth defeated Leicester in a six-goal thriller, Crystal Palace won at Huddersfield, while on Sunday West Ham picked up a first victory of the season at Everton, after Wolves got the better of Burnley.

But who did enough to make my team of the week? Read my selections and then pick your own XI. 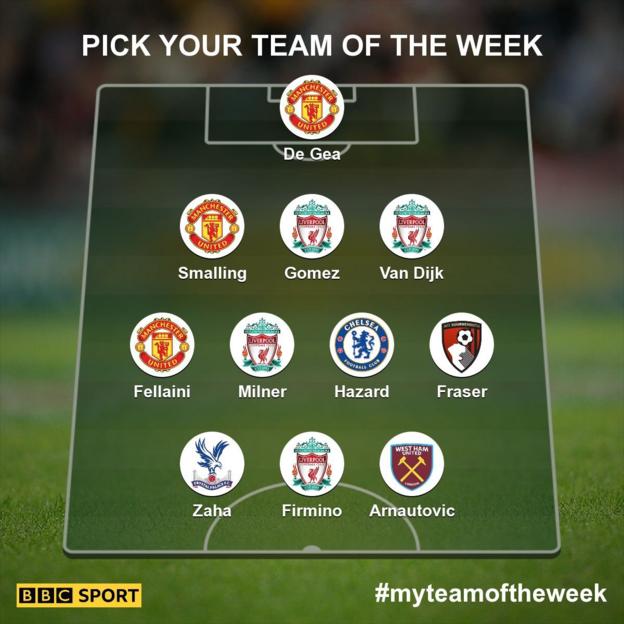 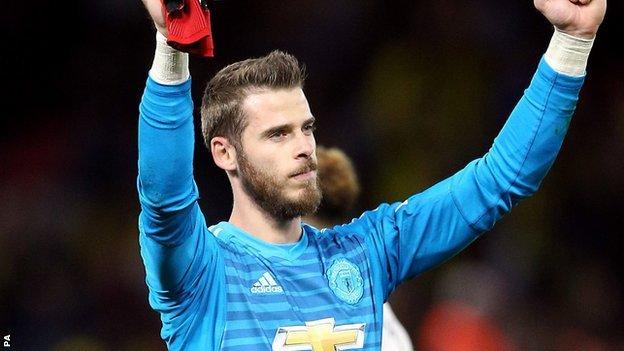 David de Gea: With goalkeepers under siege these days it amazes me how they even get to the ball. It's like facing the Ant Hill Mob every time a corner is taken.

David de Gea made a wonderful save from a corner in the dying minutes of the game against Watford, a match-winning effort from a Christian Kabasele header that, had it gone in, would have given Watford a rather undeserved point.

De Gea might have had a shaky World Cup with Spain but he's saving United valuable points again.

Did you know? David de Gea saved four of Watford's five shots on target, as many saves as in his previous three Premier League matches combined.

Chris Smalling: We've all been looking for cracks in Jose Mourinho and his players since his outbursts and the defeat against Tottenham. To my surprise I have seen nothing but total commitment.

Credit where credit's due, United's players have come out fighting and look meaner than ever. Chris Smalling, with his new 'natty dread' hair style, was outstanding against Watford.

The new look oozes swagger and if his goal was anything to go by, the defender's hairstyle may have something to do with it. Amazing what a new look can do.

Did you know? Smalling has ended up on the winning side in all 11 Premier League games in which he has scored, the joint-best such record in the competition (also 11 games for Ryan Babel).

Joe Gomez: The tackle by Joe Gomez on Lucas Moura in the second half of Liverpool's win at Tottenham would have stopped a mail train.

I said two weeks ago, after Liverpool's impressive victory at Leicester, that this kid was the best defender I've seen in years. In fact I said something far more profound than that but I'm not going to repeat it for fear of jinxing the lad.

(What I will say is Gomez is a future England captain if ever I saw one. Read more about the relevance of England's fixture against Switzerland in The Crooks of the Matter below.)

Did you know? As well as contributing three tackles and three clearances, no player recovered possession more for Liverpool than Gomez (nine times).

Virgil van Dijk: Harry Kane never had a kick. Virgil van Dijk was too big, too strong and too composed on the ball. In times like these when centre-backs look imperious, strikers have to ruffle feathers and the England captain simply wasn't prepared to have a scrap.

If ever there was a day for Harry and the boys to get among it and stick their heads in the faces of Liverpool's defenders then this was it. Instead, Van Dijk walked on to the pitch looking like a film star and walked off with the Oscar for best leading man.

Did you know? No player at Wembley made more clearances than Van Dijk (five, equal with Tottenham's Toby Alderweireld).

Marouane Fellaini: Who'd have thought it? Marouane Fellaini starring in a Manchester United shirt. When David Moyes bought the player from Everton it was universally felt that he was not in United's class.

Against Watford he looked like the answer to all their problems. Playing like this, Fellaini could be for United the player he was for Everton.

Did you know? Fellaini recovered possession for his side more often than any other player (10 times), while also winning seven of his nine aerial duels, and providing the assist for Chris Smalling's strike, a pivotal moment in the game. The Belgian also made more tackles (three) than any other United player (equal with Antonio Valencia).

James Milner: He's been playing top-class football since he was 16 years old, so we shouldn't be entirely surprised 16 years later when the player strolls through a game as though he is reading the Sunday Times.

James Milner's understanding of a game of football is second to none and already Milner is looking like my early candidate for Footballer of the Year. I strongly believe that accolade belongs to a member of the team that wins the title. So you can see where I'm going with this folks.

Did you know? James Milner made five tackles in Liverpool's match against Spurs, more than any other player on the field. The Englishman also created the joint highest number of chances for his team-mates (three - equal with Mohamed Salah), as well as attempting more passes in the opposition's half than anyone for either side (32).

Eden Hazard: My goodness Eden Hazard's first goal took me back. I haven't seen an 'over' completed so effectively for years - the term used by the pros for what is euphemistically called 'a dummy'.

The move, when executed well, can rip defences apart and Hazard used it beautifully. Hazard's hat-trick against a Cardiff team who were so far out of their depth it was scary only tells part of the story. The Belgium international is playing the football of his life.

Did you know? Eden Hazard is the fourth player to score more than one Premier League hat-trick for Chelsea (after Didier Drogba, Frank Lampard and Jimmy Floyd Hasselbaink), and he was successful with each of his three shots on target.

Ryan Fraser: This lad had a fabulous game and would have received even greater praise from me had he not dived in the early exchanges. There were lots of incidents in this game against Leicester but the dive was by far the worst of them.

He took his goals brilliantly, especially his first, but the dive marred a tremendous performance. He's made my team of the week but I had to think about it and I shouldn't have. Pros don't like people who dive and that's worth remembering.

Did you know? Ryan Fraser had a hand in three goals in a single Premier League game for the first time (two goals, one assist). 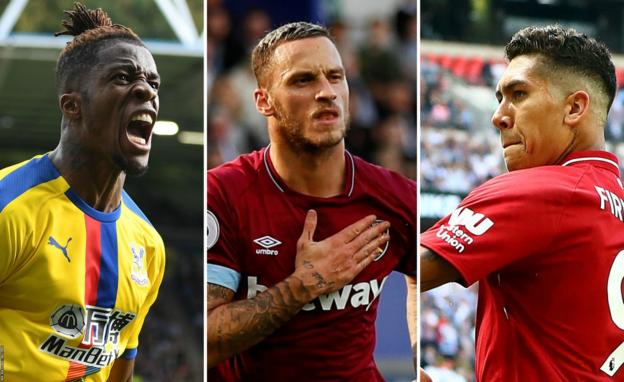 Wilfried Zaha: Now, Wilfried, stop this whinging and whining in your after-match interviews. You're playing in a contact sport and the better the player the more likely they are to get kicked. Why haven't you worked that out yet?

Leave the referees and the pundits to condemn the assassins, you just keep scoring sensational goals, receiving the plaudits and signing the massive contracts for all this inconvenience.

That's the way it works and it's not a bad exchange. Oh, and by the way, I never heard George Best or Johan Cruyff complaining to the press about players kicking them.

Did you know? Since the start of last season, Crystal Palace have averaged 1.5 points per game when Zaha has played (33 matches), compared to no points when he has not been involved (10 matches).

Marko Arnautovic: I've said throughout West Ham's torrid time under new boss Manuel Pellegrini that provided the Hammers don't lose their nerve they have enough quality to survive in the Premier League.

The result against Everton was a good indicator of what West Ham are capable of once this new group of players settles down and finds a rhythm.

Much of the pulsation came from Marko Arnautovic and his new strike partner Andriy Yarmolenko. Arnautovic is high maintenance but if the Austrian can be bridled he can be one hell of an asset.

Did you know? Since the start of 2018, only Mohamed Salah (23) has had a hand in more Premier League goals than West Ham forward Marko Arnautovic (16 - nine goals, seven assists).

Roberto Firmino: At no stage did Tottenham's back four come to terms with Liverpool's front three. Every time Firmino picked up the ball, Sadio Mane and Mohamed Salah took off like stealth bombers leaving an airbase.

Liverpool look like the team most likely to stop Manchester City from winning the title for a second consecutive season.

However, should anything happen to Liverpool's frontline attack then we may have a different situation entirely.

Did you know? Roberto Firmino has been directly involved in 61 Premier League goals for Liverpool under Jurgen Klopp (38 goals, 23 assists), 16 more than any other player.

The Crooks of the Matter

I'm still reeling from the 25-second black-and-white transmission of the England v Switzerland game to mark the 25th anniversary of anti-racism organisation Kick It Out. The idea was a piece of marketing genius.

It was so simple yet so effective, matched only by the superb introduction to the match by Sky's David Jones and Martin Tyler, who between them provided the perfect overview. To cram 25 years into 25 seconds takes some doing, but they did it.

I will admit, over the years I may have probably been the Football Association's harshest critic but that has come from a desire to see the greatest FA in the world play a greater part in using football as a tool to initiate change and create a more inclusive society.

As I watched the television turn from colour to black and white I thought of Laurie Cunningham, Ray Wilkins and Cyrille Regis, three former England internationals who, had they been in that line-up, would have so approved of the tribute and recognised its significance.

How fitting then, that Marcus Rashford should score the winning goal to mark an occasion that was originally initiated to protect youngsters like him long before they were even born. Well done Kick It Out and thank you England. You make a great team.