The Red Devils' 3-1 defeat at West Ham on Saturday made this their worst start to a top-flight season since 1989-90.

It is their third loss in seven league games and follows a home Carabao Cup exit to Championship side Derby.

"There will be conversations at the top level about the future of the manager and the squad," Ferdinand told BT.

"The basics are not being done and something has to be said."

Asked post-match if he could assure United fans the situation would improve, Mourinho told BBC Radio 5 live: "I can assure Manchester United fans that I give 100% every day, every training [session], every 24 hours of the day, every match - that I can assure.

"And I can assure that I am a brave man with lots of experience and tomorrow morning I will be there and I will fight hard for the match on Tuesday. We go with everything we have for that match"

However, Ferdinand added: "You can't let a situation like this continue throughout the season - wars in the press, leaks, players on one side of the dressing room, Mourinho and his staff on the other. If that continues this will be one of the worst seasons in the club's history." 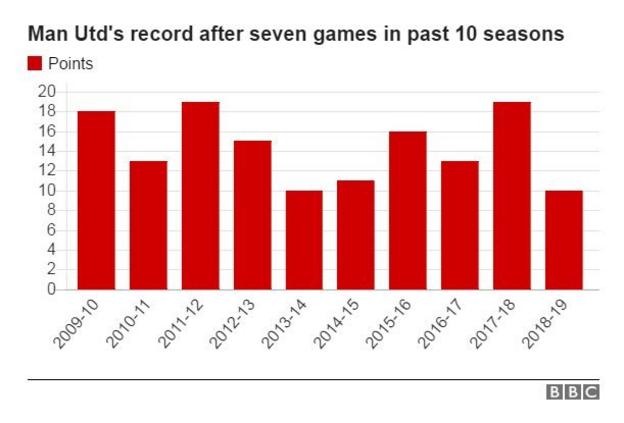 'A war within the club' - Scholes

West Ham's victory at London Stadium was their biggest over Manchester United in 36 years, achieved through Felipe Anderson's fifth-minute strike, a Victor Lindelof own goal and a simple finish from Marko Arnautovic after questionable defending.

Substitute Marcus Rashford had given the visitors hope when his smart finish from a corner reduced the arrears to 2-1, but former midfielder Paul Scholes said "the fight was just not there".

"That was as bad as you've seen from a United team for a long time," Scholes told BT Sport. "The attitude has been questioned before and it has to be questioned again. The hunger and desire to get amongst people wasn't there.

"At this minute, this club is in a bit of a mess.

"Is this the end for the manager? I don't know. Who's going to get more out of this team? We just know at this moment in time it feels wrong."

Mourinho took the United job in the summer of 2016, and led the team to success in the Europa League and League Cup in his first season.

They were runners-up to Manchester City in the Premier League and Chelsea in the FA Cup last season.

Analysis - 'Sacking Mourinho would fly in face of Glazer ownership'

No sooner had the final whistle gone at London Stadium than the bookmakers were sending round the inevitable press releases stating Mourinho was the favourite to be the next manager to leave his job.

The reality is if that scenario unfolds, it would fly in the face of the Glazer family's ownership of Manchester United.

While the reclusive American family, who never talk to the media about United, can be accused of many things, being knee-jerk is not one of them.

In the immediate aftermath of their takeover in 2005, Sir Alex Ferguson was in the process of trying to rebuild his team, which had fallen well behind Chelsea and Arsenal. The Glazers stuck with him.

David Moyes' tenure was not brought to an end until United knew it was mathematically impossible to qualify for the Champions League, despite numerous awful results and even a plane flying over Old Trafford trailing a banner that demanded his exit.

When rumours circulated around Christmas 2015 that Louis van Gaal was about to be sacked, they proved to be false. It was only at the end of the season when, once again, United had not finished in the top four, that he was removed.

I was told earlier this week results would be the criterion Mourinho would be judged on. As bad as the defeat at West Ham was, I didn't get the impression we were talking about one.

Who is at fault - manager or players?

Alexis Sanchez's failure to score so far this season meant he did not even make the squad at London Stadium, with Anthony Martial replacing him in attack.

Midfielder Paul Pogba - who was told in midweek he would not captain the team again following his comments that his side need to "attack, attack, attack" at home, and was then involved in an apparent training-ground dispute with Mourinho - was replaced on 70 minutes after an ineffective display.

But it was in defence where there were most post-match questions.

Midfielder Scott McTominay, 21, started as part of a three-man backline, prompting Scholes to question whether it is the quality of the players at Mourinho's disposal - not just the manager himself - to blame for their poor run of results.

"I wonder if the quality is there," said Scholes. "That back four that finished the game - Ashley Young, Chris Smalling, McTominay, Luke Shaw - isn't one that will get you anywhere near the top of the league."

Ferdinand, winner of six Premier League titles and the Champions League with the club between 2002 and 2014, agreed but also questioned the players' attitude.

"There is a lack of quality," he said. "I'd question whether the players who have been brought in are good enough. But on top of that you have to get the players playing. I don't see anyone shouting down people's throats. There's no intent to make life difficult for other players.

"As a footballer your DNA is about hard work and effort. I didn't see that today. I didn't see them make two or three passes in succession - that's criminal. I don't see enough players working hard to say to the manager 'this is my place in the team'. You've got to work hard and grind and Man Utd didn't."

No complaints with players' attitude - Mourinho

Mourinho said he could have "no complaints with the players' attitude" but did question the quality of their play - as well as being unhappy with several of the officials' key decisions.

"When you come here and you feel the team, not shaking, but with a lack of confidence, it's important to have a positive start," he told BBC Sport.

"We had the worst possible start, conceding a goal that was offside. The linesman made that mistake and we were punished.

"After that we had a positive reaction. We had good situations but then we conceded a goal which was a bit ridiculous to concede. Everyone knows Andriy Yarmolenko is is left-footed. We had Nemanja Matic one-on-one with him, we had Lindelof and Shaw just after him, but we were not able to put pressure on the ball. These are things their central defenders did, and Pedro Obiang and Declan Rice in front of them fought to keep the clean sheet.

"And then there was also another mistake, from the referee. Pablo Zabaleta pulls Rashford from behind, and their third goal kills it.

"When you are winning and full of confidence it's the best vitamin you can have. Sometimes you score impossible goals.

"When the moment is not the best it looks like everything goes against you and today we can feel exactly like that. In the next match on Tuesday [against Valencia in the Champions League] the players have to be brave and strong and try to have a better start than today."

What are Man Utd fans saying?

Should Mourinho stay or go? And what about Pogba's future? The Red Devils fans who called 606 on Saturday had some strong views.

Devon: "Mourinho is a broken man, he is finished at United. He is trying to draw attention from poor performances by picking a fight with Pogba. When I saw the line-up today I knew there was no chance of United winning that game."

Ashley: "Mourinho and Pogba might have to go but Mourinho cannot go immediately. I think it sets a bad precedent if he gets kicked out due to player power.

"Pogba has to go, whatever his problem is he's unsettling everyone else. Get rid of him when the window opens. Then let's think about Mourinho."

Graham: "Get rid of both Jose Mourinho and Paul Pogba. Get rid of them. If you get rid of one, the other will think they have the world at their feet.

"We have got rid of bigger players. Look at the way Roy Keane went, he was a better player, Mourinho is not going to improve the squad, he is not trying to play the football we play.

"If you give me the Mourinho running up and down the touchline celebrating with the team I'll take that. This Mourinho just sits, moping, looking like he doesn't care."

Ben: "I was appalled with what I saw today. It not a team, it is a bunch of individuals who can't play together. They are nothing like the United of old. The team is chopped and changed every week.

Scott McTominay is a good player but he was playing in defence. The spine of that team should be Eric Bailly, Pogba and Romelu Lukaku.

"I disagree Pogba had got to go. It is Jose. All the older fans around me tell me it is Mourinho He's slowly losing the team and you can see that on the pitch. They were not trying hard enough."