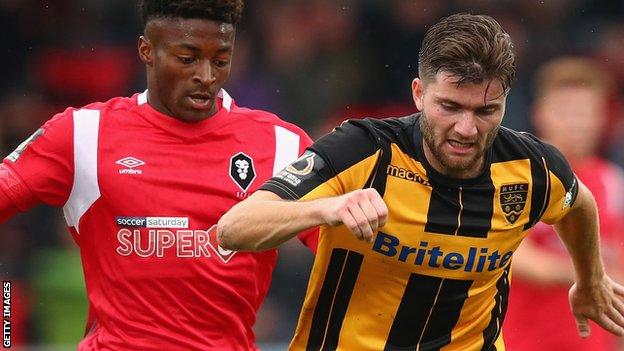 You can catch up with all of the National League news from September here. Meanwhile, check out the gossip page for the latest rumours and, for all of the manager ins and outs, see our list of current bosses.

Aldershot Town forward Dan Holman has left the club after his contract was mutually terminated.

The 28-year-old made 13 appearances for the Shots this season, but a club statement said "the travel was becoming too much for him".

Dover Athletic have signed goalkeeper Lee Worgan on a two-and-a-half-year deal. The 34-year-old will also take up a coaching position with the Kent club. Maidstone, meanwhile, have added Lincoln goalkeeper Grant Smith, 24, on loan until 31 December.

Dagenham & Redbridge have cancelled the contract of 19-year-old midfielder Tyrique Hyde by mutual consent after only a single appearance this season.

Maidstone have signed centre-back Rob Swaine, 30, from Chelmsford City on a deal until the end of the season.

Boreham Wood trio Danny Woodards, Ricky Shakes and Keiran Murtagh have all signed new deals with the National League club. Shakes and Woodards have agreed one-year extensions, while Murtagh has extended his contract by two years.

Dover have signed midfielder Bobby-Joe Taylor, 23, on a month's loan from National League rivals Bromley. The club have also confirmed a contract extension for striker Inih Effiong until the end of next season, while captain Mitch Brundle has announced his switch to daytime training. Meanwhile, midfielder Aryan Tajbakhsh and defender Ejiro Okosiem have both been released.

Dagenham & Redbridge have moved to bolster their defence by signing former Yeovil full-back Nathan Smith as well as central defender Emmanuel Onariase, who joins the club on loan from Rotherham until January.

Solihull Moors have strengthened their forward line by signing Leamington FC's Matty Stenson, 24, for an undisclosed fee. The striker has already netted eight times in all competitions this season.

Boreham Wood striker Angelo Balanta has joined Dagenham and Redbridge for an undisclosed fee. The 28-year-old scored 19 goals in 85 appearances for Boreham Wood.

Maidstone United have signed striker Elliott Romain, 26, from Dagenham & Redbridge on a deal to the end of the season.

Barnet midfielder Ephron Mason-Clark has agreed a new three-year contract tying him to the club until 2021. The 19-year-old has made 13 appearances so far this season.

Ebbsfleet United have parted company with assistant manager Steve Gritt and first team coach David Jupp as part of a financial restructure at the club.

Defender Louis Laing has left Hartlepool United after his contract was cancelled by mutual agreement. The 25-year-old made 43 appearances for the club, but only one this season.

Chesterfield striker Levi Amantchi has signed a first professional deal with the club. Academy graduate Amantchi has recently made his senior debut for the Spireites.

Maidstone United have signed midfielders Simon Walton and Jack Powell on deals until the end of the season. Walton, 31, joins from Billericay while Powell, 24, arrives from Ebbsfleet.

Havant & Waterlooville have signed Finland Under-20 midfielder Alex Bradley, 19, on loan from West Brom until January.

Liam Agnew, Kelvin Langmead and Lloyd Kerry have signed new contracts Harrogate Town. The length of the deals have not been disclosed.

Veteran goalkeeper Ryan Young has had his contract with Havant & Waterlooville cancelled, as the 37-year-old is looking for regular football.

Dover manager Andy Hessenthaler has made his first signing since taking charge on Monday, adding Maidstone midfielder Stuart Lewis, 30, to his squad on a two-year deal.

Cheltenham Town left-back Joshua Debayo, 21, has also joined the Kent side on loan.

Maidstone United captain Stuart Lewis is set to leave the Gallagher Stadium after the midfielder handed in a transfer request.

Chesterfield have signed right-back Jake Bennett from Sheffield United on loan until the end of the season.

Former Braintree Town manager Hakan Hayrettin has taken charge as caretaker boss while the club look for a successor to Brad Quinton, who left by mutual agreement on Sunday.

Ex-Reading defender Shorey played twice for England in 2007, while Little appeared in the Premier League for the Royals and Portsmouth.

Barrow have extended the loan of defender Rhys Norrington-Davies, 19, from Sheffield United until the end of the season and added midfielder Erico Sousa on a month's loan from Accrington Stanley.

Manager Brad Quinton has left Braintree Town by mutual agreement with the club bottom of the National League.

Saturday's 2-1 loss at home to Eastleigh left Braintree seven points below 20th-placed Chesterfield, after one win from their first 15 matches.

The 64-year-old returned for his second spell as boss in January 2013, having previously managed the club between 1985 and 1995.

Defender Gabriel Osho, 20, has joined Aldershot Town on a month's loan from Championship side Reading.

Bromley defender Dan Johnson, 23, has left the club after just over two seasons with the Ravens.

Maidstone United have signed 18-year-old goalkeeper Josh Strizovic from Billericay Town, while fellow keeper Matt Funnell has been released by the Stones.

Sutton United striker Tommy Wright will miss the rest of the season after suffering a ruptured cruciate ligament during Saturday's win at Leyton Orient.

Boss Paul Dowsell said Wright will have surgery in three to four weeks, with a six-month recovery period to follow.

Richards has replaced Peter Beadle, who was sacked in September despite winning three league titles in three seasons at Edgar Street.