Ex-England and Tottenham manager Glenn Hoddle is "responding well" to treatment after being taken to hospital in a serious condition on Saturday.

Hoddle was taken ill after appearing as a pundit for BT Sport earlier in the day on his 61st birthday.

"The condition is serious but Glenn is receiving specialist treatment and responding well," a spokesman said.

Hoddle earned 53 England caps and is considered to have been one of the best players of his generation.

The station's Saturday afternoon football results show was cancelled as a result.

The spokesman added: "Earlier today Glenn collapsed at the BT Sport studios - he received immediate medical attention on set and was transferred by paramedics to a hospital in London.

"His family are with him and would like to thank everyone for their support. They have also asked to respect their privacy at this time."

Gary Lineker, the Match of the Day presenter and former Tottenham and England striker, posted on social media: "Hugely worrying news that Glenn Hoddle collapsed at the BT studios earlier. Thoughts are with him and his family. Come on, Glenn."

As a player, Hoddle won the FA Cup and Uefa Cup with Tottenham and also had spells with Monaco, Swindon and Chelsea.

Hoddle became player-manager at Swindon and Chelsea, and is credited with turning the west London side into a cosmopolitan outfit by signing Netherlands great Ruud Gullit, who went on to replace him as boss at Stamford Bridge.

From there he managed England for two and half years, taking them to the 1998 World Cup, but his reign ended in controversy when he admitted a "serious error of judgement" after suggesting disabled people were being made to pay for the sins of past lives.

He went on to manage Southampton, Tottenham and Wolves, before continuing coaching and his career as a TV pundit.

Good wishes for a midfield maestro

Former Spurs team-mates were quick to send their support to Hoddle on social media.

Ex-Argentina midfielder Ossie Ardiles said: "Get well soon Tommy! Our thoughts and prayers with him and his family."

Former goalkeeper Ray Clemence urged Hoddle to "stay strong", while Chris Waddle, another ex-England international said: "Get well soon, Glenn. Our thoughts are with you."

Brighton boss Chris Hughton, twice an FA Cup winner with Spurs alongside Hoddle, said: "Glenn is a friend, I have known him for a long time back to my Spurs youth days. He was a model professional, the one we looked up to and we wish him all the best."

Ex-Spurs defender Graham Roberts said: "Thinking of the greatest player I have ever played with, we know you will be fine Glenn, thinking of you mate." 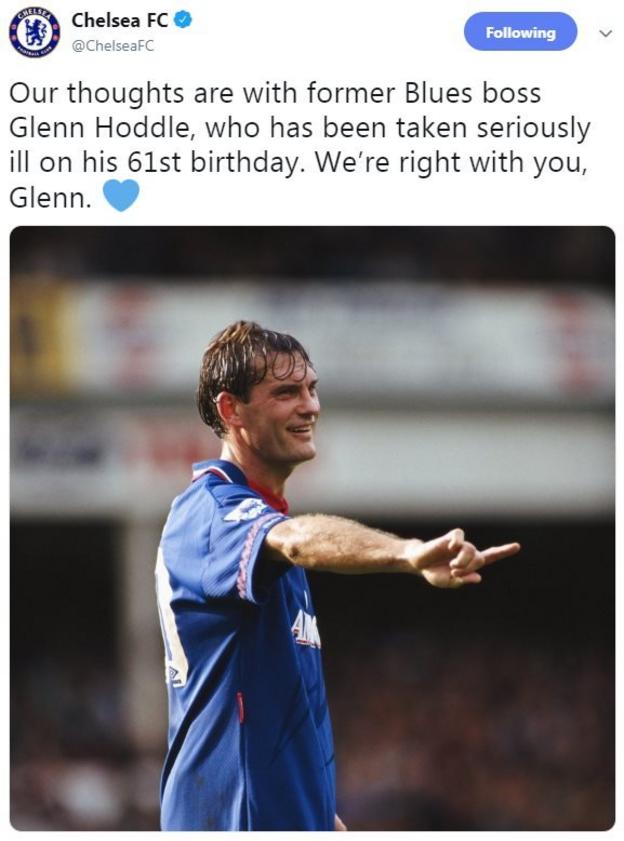