The fringe midfielder, 23, was introduced at half-time in Sunday's League Cup semi-final win over Hearts with the contest still goalless.

Christie was involved in all three Celtic goals, netting a magnificent third as the holders eased into the showpiece with a 3-0 triumph.

"He made the difference," Rodgers told BBC Scotland.

What changed when Christie came on?

Celtic had huffed and puffed in a fragmented first half. Hearts were compact and robust. There were few chances, and the flow of the game was disrupted by injuries to Steven Naismith and Eboue Kouassi.

Rodgers said Olivier Ntcham had been struggling with "tightness around his hamstring". He could have continued, but the Celtic boss felt Christie's "energy" would be pivotal.

The Scotland international's impact was huge. He buzzed around with gusto, showed snarl in his pressing and slickness on the ball.

The midfielder won a contentious penalty, hitting the deck after being clipped by Oliver Bozanic in the box, and Scott Sinclair converted.

Christie's weak shot was fumbled by Zdenek Zlamal in the Hearts goal. It may have crossed the line, but James Forrest rammed home the rebound in any event.

Then came a moment of brilliance, Christie whistling a wonderful left-foot shot into the top left-hand corner to kill the tie.

Christie joined Celtic from hometown club Inverness Caledonian Thistle on a four-year deal in 2015, but has spent the past three campaigns on loan, first to his former club, then two terms at Aberdeen.

At Pittodrie, he helped the Dons to back-to-back second-place Premiership finishes, as well as League Cup and Scottish Cup final appearances - although he could not feature in defeats by his parent club.

Now in the final year of his contract at Celtic, he has made a total of 23 outings for the Scottish champions, and 15 of those have come off the bench. The semi-final was his 11th appearance of the season and ninth as a substitute.

But Rodgers showered the substitute with praise after his fine 45-minute display at Murrayfield.

"Ryan's gone out [on loan] for a purpose, to get experience and have that pressure of playing every week," he said.

"He's got that personality now to come in to such a game and go and impose his quality - his intensity and pressing and defending was very good, and his input into all three goals was sensational." 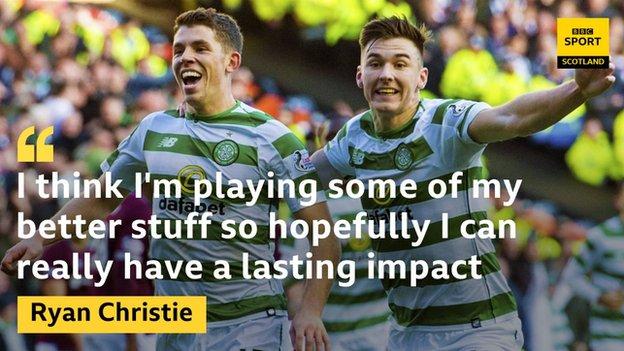 'He can now handle himself physically' - analysis

He's filled out, much stronger than we saw as a young boy coming in. I always thought he was too lightweight to get into a Celtic team. Going out on loan, working with the first team probably in the gym on a constant basis. He's filling out into a young man that can handle himself physically at that level.

He's got all the ability, but the physical strength, that strength has helped his quickness around the pitch. He slotted lovely into Ntcham's role.