Sunday's two Scottish League Cup semi-finals took precedence this weekend - not only in the headlines but in Rob Maclean's team of the week.

St Mirren goalkeeper Craig Samson is the only man to feature from Saturday's league fixtures. Semi-final winners Aberdeen and Celtic make up the rest of the BBC Scotland commentator's team. 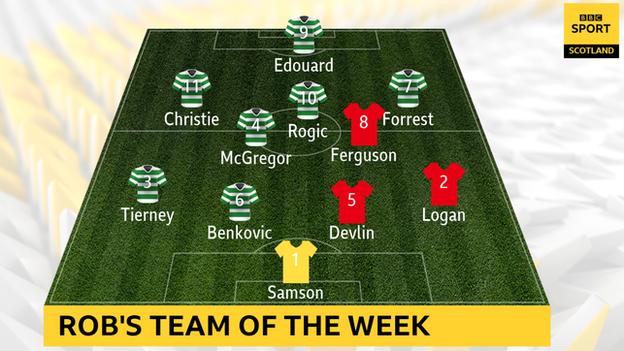 The struggling Buddies' 2-0 defeat by St Johnstone in Perth would have been heavier had it not been for the saves of Samson. One stop in particular, when he tipped Tony Watt's header on to the crossbar, was right out of the top drawer.

Shay Logan had, potentially, the toughest task on the Hampden pitch to try to deal with on-form Rangers winger Ryan Kent. Logan made a lot of well-timed tackles and helped prevent Kent becoming a big player in the game.

Former Hamilton Accies skipper Michael Devlin is a developing Don with each passing game after his long injury absence. He delivered an assured performance alongside central defensive partner Scott McKenna that meant goalkeeper Joe Lewis had only one serious save to make.

It was an emotional weekend for on-loan Leicester City centre-half Filip Benkovic and, after the helicopter crash at the King Power Stadium, home of his parent club, Benkovic dedicated Celtic's semi-final win to the families of those who died. He also managed to turn in one of his best performances in Scottish football so far.

Kieran Tierney has set the bar high for himself with so many top performances in the past two seasons and it's difficult for the 21-year-old left-back to always reach that level. But he showed signs at Murrayfield on Sunday that he's getting back to his best.

Lewis Ferguson has all the tools to become something special. He's had better games than Sunday's semi-final defeat of Rangers, but the 19-year-old produced the moment that mattered most with a thumping header for Aberdeen's winning goal that was all about the desire to get himself on the end of Niall McGinn's corner.

Callum McGregor dropped back to a deeper midfield role when Celtic suffered injuries on Sunday and must have made Scotland manager Alex McLeish think about deploying him in that position. There are few players in our game who use the ball better than McGregor.

James Forrest is in a rich vein of form as Hearts left-back Demi Mitchell found out in Sunday's first League Cup semi-final. When the Celtic winger scurries forward with the ball at his feet, he takes a whole lot of stopping.

It's getting to the stage where I should cut and paste this paragraph from week to week. Tom Rogic glides through games and oozes quality. The Australian was a key player as Celtic beat Hearts emphatically in the end to reach another final.

Celtic's lack of summer signings has offered Ryan Christie the opportunity to force his way into Brendan Rodgers' first-team thinking. Introduced at the interval on Sunday, he won a penalty and scored the other two goals. Yes, I'm giving him the second one, which, for me, dribbled over the line.

There wasn't exactly a mad scramble to claim the main striking position in my leading XI from the weekend. Odsonne Edouard is the man in possession and Celtic's 20-year-old Frenchman did enough at Murrayfield to hold off the underwhelming challenge for that up-front role.