We asked you to pick your Premier League team of 2018... and the results are in.

Some selections were close, others less so.

As of 12:00 GMT on 1 January, this is the team you selected, with a few extra details on those who narrowly missed out. 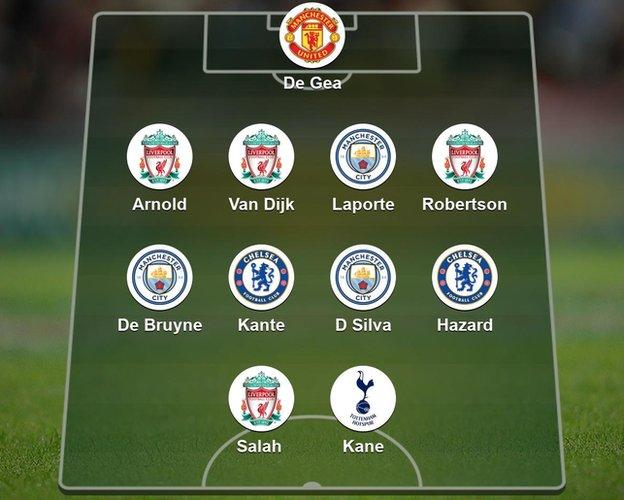 Manchester United's David de Gea edged out Liverpool counterpart Alisson. The Spaniard was selected in 35.5% of teams, while Alisson was in 30.5%.

The closest battle for a place in your team of 2018 came at right-back - Liverpool's Trent Alexander-Arnold edging out Manchester City's Kyle Walker by 23.8% to 23.4%.

Things were much more clear-cut at centre-back.

Virgil van Dijk was chosen by a massive 85% of you after an impressive first year at Liverpool. With 4-4-2 the most-used formation, the Netherlands international is paired with Manchester City's Aymeric Laporte (21.82%), who saw off competition from Van Dijk's Liverpool team-mate Joe Gomez, Tottenham's Toby Alderweireld and Leicester's Harry Maguire.

At left-back, Liverpool's Andrew Robertson was selected by 47% of you, comfortably beating Chelsea's Marcos Alonso (12%).

Manchester City's Kevin de Bruyne was the most popular midfield pick, making it into 65.2% of teams - albeit in different positions. The majority of those picks came on the right so the Belgian takes that spot in your line-up.

Chelsea's N'Golo Kante takes the defensive role in central midfield after making it into 24.1% of teams - edging out Manchester City's Fernandinho (20%).

Alongside Kante in midfield is City playmaker David Silva, with 42.2% of you picking the Spaniard. Tottenham's Christian Eriksen was the next most popular.

On the left it's Chelsea's Eden Hazard, who was selected in 62.2% of teams - albeit not all in the same position.

It's perhaps no surprise who the most popular player is in your team of the year - Liverpool's Mohamed Salah, who scored an unrivalled 28 Premier League goals in 2018, was selected by 87.63% of you.

Partnering the Egyptian is Tottenham's Harry Kane. The England captain was picked in 54.75% of your teams, having scored 25 goals in the calendar year.

Arsenal forward Pierre-Emerick Aubameyang was the next most popular striker (30.67%), followed by Sergio Aguero with 21.04%.

So that's BBC Sport users' team of 2018. If you still haven't selected your XI you can still do so using the tool below.

Pick your Premier League Team of 2018