A classic World Cup, a Champions League final that had everything and the end of the road for two of the Premier League's most successful managers.

There was loads of footballing drama in 2018 - and lots that will live in the memory for a long time to come.

We came up with a list of our most memorable moments of the year and asked you to rank them. Here's your verdict, in reverse order.

We were only planning to have 10 memorable moments, but there was one iconic incident we simply could not leave out.

One man. One legend. One throw-in.

Iran were 1-0 down against Spain in injury time and had a throw-in - one final chance at claiming a famous draw.

Milad Mohammadi kissed the ball, touched it off his forehead, looked to the sky and then did a forward roll before cancelling his plan to throw the ball at the final second. While the world looked on, baffled, he composed himself and took an orthodox short throw-in.

But given that it came in at number 11 in the rankings, maybe we should have stuck to a top 10 after all.

Club managerial appointments can often go under the radar during the World Cup. Julen Lopetegui may well wish that had been the case with him.

Spain went one better than the Republic of Ireland's effort of sending their captain home on the eve of the 2002 World Cup when they sent their manager home the day before the opening game.

La Roja came into the tournament as one of the favourites, having gone 20 games unbeaten under Lopetegui - but just two days before the tournament started, Real Madrid announced he would be taking over as their boss after the tournament.

Spain were so furious they let him start that job early by sacking him, with sporting director Fernando Hierro taking over for their ill-fated World Cup campaign - they were knocked out of in the last 16 by hosts Russia.

Luckily it worked out well for Lopetegui at Real... 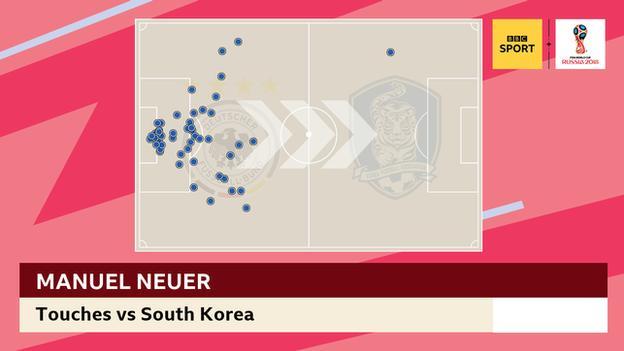 Goalkeepers, you have one job. Stand in the goal and try to stop the ball. But as Son Heung-min was dumping Germany out of the World Cup, Manuel Neuer was 80 yards away.

The world champions needed to win but two minutes into injury time were trailing to Kim Young-gwon's goal, which had been awarded by the video assistant referee.

With nothing to lose, and Germany needing to score twice, Neuer, who manager Joachim Low once said was good enough to play in midfield, took that commendation literally.

He came forward in open play for about a minute before losing the ball to Ju Se-jong, who aimed a long punt down to Son. Neuer knew the game was up and just stood watching instead of chasing back to his goal.

Anyone know if there's a German word for the pleasure derived by someone from another person's misfortune?

8. Mourinho sacked and replaced by Solskjaer

Tuesday, 18 December was a strange day.

The whole world (bar a handful of people at most) woke up having no idea Jose Mourinho was about to be sacked as Manchester United boss. And we all went to bed knowing that Ole Gunnar Solskjaer was going to be the next caretaker/interim/loanee manager.

In a rarity for modern football, Mourinho's dismissal had not been broken in the media before the official announcement, which came after a limp 3-1 defeat by Liverpool on the Sunday.

Molde boss Solskjaer then became Manchester United's first loan signing from Scandinavia since Helsingborg striker Henrik Larsson. The former United striker is set to go back to his club at the end of the season... unless the Old Trafford bosses decide to appoint him permanently.

His appointment was not officially confirmed by United until the next day, although the Norwegian prime minister inadvertently broke the news on Tuesday night.

The crowd at the Stadio Olimpico erupted at the final whistle as the Roma substitutes and coaching staff piled on to the pitch to celebrate with the players. There were tears in the stands as fans could not believe what they had seen - a sensational comeback to dump Barcelona out of the Champions League.

A year after Barca became the second team in Champions League history to overturn a first-leg deficit of three goals or more (against Paris St-Germain), Roma became the third.

Trailing 4-1 from the first leg against the unbeaten La Liga leaders, nobody gave Roma any chance. But goals from Edin Dzeko and Daniele de Rossi gave the Italians hope - before Kostas Manolas' goal with eight minutes remaining.

They went on to lose to Liverpool in the semi-finals, but it will remain one of the great comebacks. 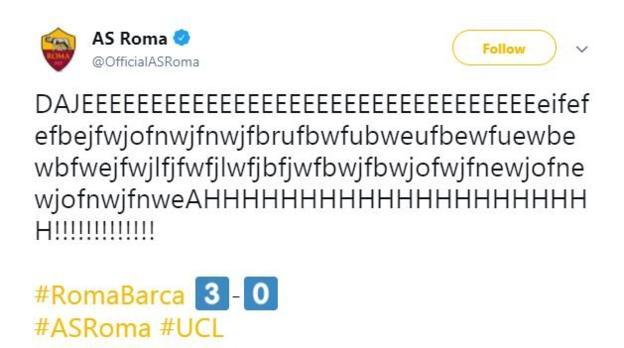 Manchester City players celebrated with the fans like it was Agueroooooo all over again. Pep Guardiola leapt into the air on the touchline like Sir Alex Ferguson celebrating Steve Bruce's title-winning goal in 1993.

Yet they had wrapped up the league a month earlier.

Gabriel Jesus' chip in the last minute against Southampton on the final day made City the first team to reach 100 Premier League points.

It was their 106th league goal of the season, another record. A positive goal difference of 79 was also a record. City won 32 of their 38 games, another record - this one for most victories in any English top-flight season.

It was the moment everybody had seen coming for five years but never actually expected to arrive.

Roughly a quarter of the population of the UK had never lived in a world without Arsene Wenger as Arsenal boss.

More than five million people had been born in the UK since the Gunners last won a Premier League title.

The Frenchman finally announced on 20 April that he would be leaving the north Londoners at the end of the season, a year before the end of his deal.

He had a seven-game farewell tour - including a last defeat at Old Trafford and a final European exit - but it all ended with a 1-0 victory at Huddersfield on the last day of the campaign.

As good as Gareth Bale's bicycle kick in the Champions League final was (see below), it didn't get him a £99m move to Juventus. But Cristiano Ronaldo's did.

Ronaldo flew into the Turin sky to send a stunning overhead kick flying past Gianluigi Buffon. It was arguably the greatest goal the Champions League has ever seen - and received a standing ovation from the Juve fans.

Four months later he was theirs and the Portugal forward admitted the round of applause was a factor in his decision to join the Italian champions.

Kylian Mbappe shone as France won the World Cup, scoring a sparkling double against Argentina and a strike from outside the box against Croatia.

He was clearly nowhere near an unknown, having already cost Paris St-Germain £165.7m, but it was the summer that Mbappe really showcased himself on the world stage as the man most likely to replace Messi and Ronaldo as the best.

The now 20-year-old has carried that form into this season, with 13 league goals in 11 games. Only Lionel Messi has scored more in Europe's top five leagues.

2. Champions League final that had everything

Mohamed Salah's season had been leading up to this moment, but Sergio Ramos had other ideas when he pulled the Egyptian's arm and injured his shoulder midway through the first half.

Salah left the field in tears as Ramos became public enemy number one in Liverpool (well the red half) and Egypt.

The final will also be remembered for one of the biggest errors and one of the greatest moments of skill that European club football's showpiece game has ever seen.

Goalkeeper Loris Karius' career at the club effectively ended when he threw the ball directly at Karim Benzema to hand Real the opening goal.

Welsh winger Bale's relationship with Real has been rocky at times but he etched himself into folklore with his fourth touch of the game.

After coming off the bench, he sent an absolutely sensational bicycle kick flying past Karius from Marcelo's deflected shot.

The fact that Karius spilling Bale's 30-yard strike into his own net to make it 3-1 was neither the German's biggest error nor the Welshman's best goal of the game tells its own story.

But while the game was undoubtedly a classic, there was an even more memorable one to come just a few weeks later...

Beer. Everywhere. Tears. Everywhere. A moment some England fans thought they would go to the grave without experiencing - a penalty shootout win at a World Cup.

It was a gloriously sunny summer in which, for a brief period at least, football seemed to be coming home. England reaching the World Cup semi-finals was a shock to many, but the most surprising bit was the Three Lions actually winning a real-life penalty shootout.

Gareth Southgate's side looked set for more woe when Jordan Henderson's kick was saved, but keeper Jordan Pickford and Eric Dier were the heroes as England beat Colombia.

If history is anything to go by - with their only previous shootout success coming in Euro 96 against Spain - their next penalty win will be at Euro 2040.