Marouane Fellaini's injury-time winner gave Manchester United a dramatic victory over Young Boys and sent his side into the last 16 of the Champions League.

With Juventus beating Valencia to remain top of Group H, United knew victory would send them through too but an all-too-familiar unconvincing home performance had seen them struggle to make the breakthrough.

As the board was put up to signal three minutes of injury time, United were still looking for their first goal at Old Trafford in Europe this season.

It arrived seconds later, when Fellaini collected Romelu Lukaku's flick in the box from Luke Shaw's pass, held off Loris Benito and, with the ball touching his hand in the process, turned to fire into the bottom corner.

The goal brought a delirious reaction from United boss Jose Mourinho, who flung a basket full of water bottles to the floor in celebration.

"For me it was not handball. I controlled the ball, if it touched my hand it was not on purpose," said Fellaini.

His goal came from United's 21st effort at goal, after Marcus Rashford and Fellaini had wasted good chances and the hosts appeared to have run out of ideas as the game entered its closing stages.

Fellaini came to the rescue, meaning United can go to Valencia for their final game with their progress secured and with a chance of topping the group. 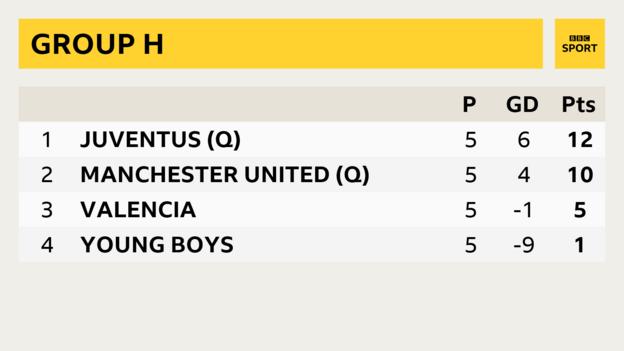 United's first task was to get to the ground on time, which they achieved despite the ongoing traffic problems that have caused them problems in getting to their European games this season.

Their next job was to put the ball in the net, but Rashford set the tone for the evening when he galloped clear in the fifth minute and fired wastefully over.

That left Mourinho staring at his bench in disbelief, and he was to see more golden opportunities go begging in the second half as Rashford slipped in front of goal and Fellaini blasted over from point-blank range.

Although United continued to attack, they lacked the invention to create further clear-cut opportunities and the frustration in the stands began to grow.

The introduction of Paul Pogba and Lukaku from the bench did little to change things and Mourinho's side were seconds away from drawing a blank in three consecutive European home games for the first time in their history until Fellaini struck.

His heroics should not mask a poor performance, however, and the empty seats inside Old Trafford at the start of the game were another sign of the times.

It would appear some United fans have lost patience with what they have been watching, and many of those who did turn up had gone home by the time Fellaini struck.

Mourinho gets reaction from players - but what about the fans?

Mourinho accused his side of lacking "heart and desire" in Saturday's draw with Crystal Palace and reacted by leaving Pogba and Lukaku on the bench.

His players did react to his demand for more urgency at the start of the game but, following Rashford's early miss, their intensity faded.

That was matched by the apparent apathy in the stands - there was no repeat of the booing that came at the end of the Palace game - but there was little enthusiasm on display from the United fans either.

They attempted to urge their side forward late on but most of the atmosphere during the game was provided by the 3,000 travelling Young Boys fans, who were decked in matching yellow jackets and did not stop singing throughout.

United break their duck - the stats

United are back in domestic action on Saturday when they travel to play Southampton in the Premier League (17:30 GMT) and wrap up their Champions League group campaign at Valencia on Wednesday, 12 December (20:00).

Young Boys, who are out of Europe after this defeat, play their final game in Group H at home to Juventus on the same date.