DJ Martin Solveig apologised to Women's Ballon d'Or winner Ada Hegerberg for asking her after she collected her award if she knew "how to twerk".

The Frenchman, 42, said Lyon and Norway forward Hegerberg - who answered "no" - had told him after the ceremony she "understood it was a joke".

The 23-year-old was named the inaugural winner of the award, which recognises the world's best player, in Paris.

Real Madrid and Croatia midfielder Luka Modric won the men's award, becoming the first player other than Lionel Messi or Cristiano Ronaldo to claim the trophy in more than a decade.

Solveig was playing music throughout the ceremony, and also danced with Hegerberg to Frank Sinatra.

During the presentation of her award, he asked her: "Do you know how to twerk?" She responded: "No."

Hegerberg, who had just made a speech talking about her hopes of inspiring girls to believe in themselves, appeared unhappy at the question, sparking the reaction on social media.

What was the reaction?

Solveig was widely criticised on social media, including by two-time Wimbledon tennis champion Andy Murray, who said on Instagram: "Another example of the ridiculous sexism that still exists in sport.

"To everyone who thinks people are overreacting and it was just a joke... it wasn't. I've been involved in sport my whole life and the level of sexism is unreal."

On Tuesday, Women in Sport said it was "extremely disappointed" at the comments made by Solveig.

"The sexist remarks made by Solveig were completely inappropriate and show just how much work is still left to do to create a society that is free from sexism and discrimination," the charity said in a statement.

"In her speech, Ada Hegerberg implored young girls all over the world to believe in themselves and we hope that this moment will not overshadow her incredible achievement of becoming the first recipient of the women's Ballon d'Or."

How did Solveig respond?

"Apologies to anyone who may have been offended," he wrote on Twitter. "This was a joke, probably a bad one, and I want to apologise."

In a video message, he added: "I am a little bit amazed as to what I am reading on the internet. I, of course, didn't want to offend anyone.

"This comes from a distortion of my English level and my English culture level, which is obviously not enough because I didn't mean to offend anyone and didn't know this could be seen as such an offence.

"Especially if you consider the sequence in total, when we ended up dancing to Frank Sinatra."

Solveig later posted a picture on Twitter of him and Hegerberg shaking hands. 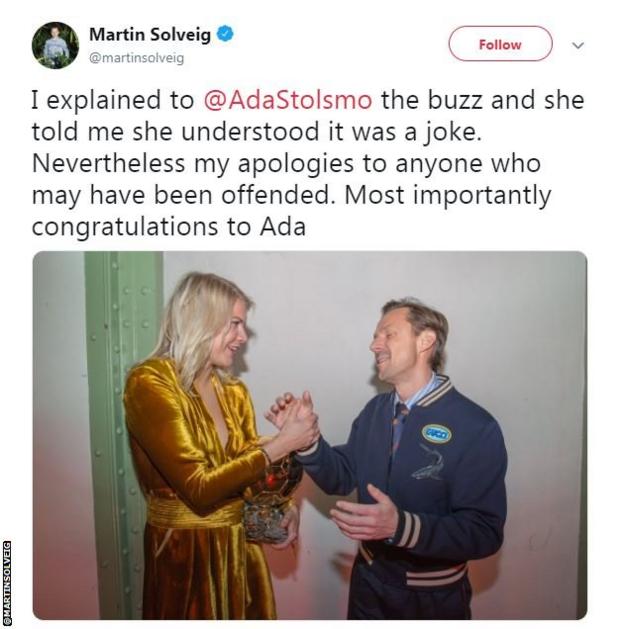 On Tuesday, he added a statement on Instagram saying the joke was "in poor taste and I am deeply sorry for my mistake".

What did Hegerberg say?

Speaking to BBC Sport, she said: "He came to me afterwards and was really sad that it went that way. I didn't really think about it at the time.

"I was just happy to do the dance and win the Ballon d'Or to be honest. I will have a glass of champagne when I get back."

Her Lyon team-mate Lucy Bronze, an England defender and Ballon d'Or nominee, told BBC Sport it was "just a joke".

"The DJ asked each person that won what their dance was but she can twerk, she was lying," she added. "It was more of a joke of making her dance."