It was the third highest attendance for a match in England on Wednesday - including Premier League fixtures - and bigger than any other EFL game in 2018-19, including November's local derby between Aston Villa and Birmingham City.

The last time Sunderland registered a bigger crowd was with the visit of Liverpool in January 2017, when 46,494 were at the Stadium of Light.

However, Bradford had a goal ruled out when Jack Payne's effort appeared to cross the line but was not given.

"The turnout today was incredible," Ross said. "It's testament to a fantastic football club, it does bring a lot of expectation and pressure and you have to have a group of players that will embrace that.

"The players took that responsibility today.

"It's the reasons that we put up with the rubbish days, the bad days and the sacrifices, to play in occasions like this. It'd be brilliant. I'm pleased the result came as a positive today."

Only Manchester United and Liverpool attracted more supporters in the Premier League than Sunderland.

Even second-placed Tottenham - whose attendances at Wembley are capped at 51,000 because of restrictions - were just short, with 45,154 at their 5-0 win against Bournemouth.

Struggling Bradford remain 21st and in the relegation places after Wednesday's loss, while three points for the Black Cats keeps up their pursuit of Portsmouth and Luton in the top two.

They might have had to settle for a point if Payne's goal had been awarded, but the Wearsiders bounced back from defeat by Portsmouth last time out with a 13th win in 22 games.

"I think we have to be careful, there's a tendency at this club to always accentuate the things that didn't go well," Ross continued.

"We were good today, we should have had the game more comfortable and if that's a stroke of luck for us then we deserve it.

"Things at times haven't gone our way and we've had to dig ourselves out of trouble.

"It's right to mention it because it would have had a bearing on the result but I thought we played in a manner that was a reward for the people who came." 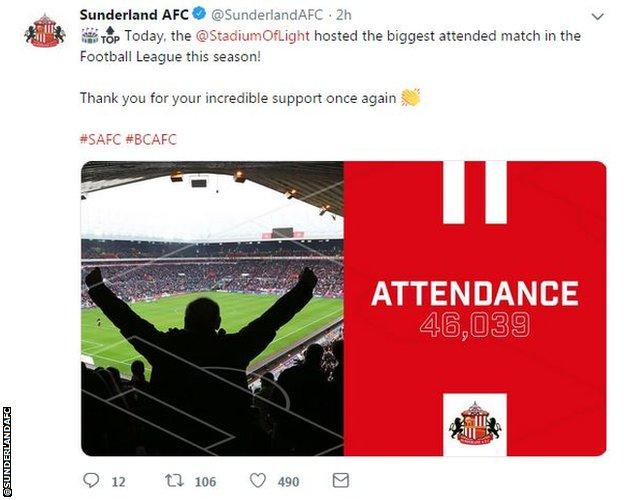