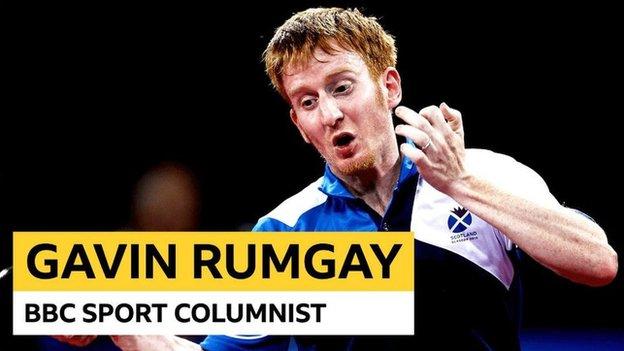 On Sunday at about 11:30 GMT, I'll leave my parents house and walk the short distance to McDiarmid Park to watch St Johnstone take on Rangers. It's a journey I've made time and again and one that still sends adrenaline rushing though my body.

I remember my first game against Manchester United, watching Saints face Monaco, and being kissed by an old man during a Tayside derby. Not all great memories, I admit...

But I feel it is a badge of honour to support my local team and it's helped me build friendships and an identity. After all, men only speak about two topics - football and women. So at least I have one covered.

I was only five when Manchester United came to Perth. It was October 1989 for the official opening of McDiarmid Park, the construction of which had involved my dad's plumbing expertise.

Anyway, Alex Ferguson turned up with a full squad including the likes of Paul Ince, Mark Hughes and Brian McClair. The latter would score the only goal in front of 9,788 spectators, that included not only myself and my dad, but Sir Matt Busby and Bobby Charlton.

Actually, I should probably make a confession. The goal wasn't actually scored "in front" of me. My memories are pretty vague but my dad tells me we missed the strike because I needed to go to the toilet. Not my finest moment. Maybe I was making sure that the plumbing was up to scratch...

I saw more goals when another famous name visited McDiarmid a decade later, when AS Monaco turned up in the Uefa Cup.

Saints lost the first leg 3-0 to a team but drew the return 3-3, with my attention fixed on Monaco's bald goalkeeper Fabian Barthez. He was some character, entertaining the crowd for the long spells in which the ball was in the St Johnstone half and I still vividly remember him being kissed on the head by every Monaco defender before kick-off.

I also recall Miguel Simao missing several chances for Saints and singing along to the chants of 'Lowndes, Lowndes, worth a million pounds' in tribute to our red-headed English striker who is, I believe, now a police officer in Perthshire

My favourite St Johnstone memory, though, is from a couple of years earlier. New Year's Day 1997, and a Tayside derby with Dundee.

I vividly remember the brisk four-minute walk to McDiarmid with my two best friends Gordon and Calum and I remember the nine goals scored... seven of them by St Johnstone. I can also still remember being kissed by an old man from two rows behind when we scored our seventh. Something that might be frowned upon now, I suspect.

'Elena loved to train with the boys'

All Saints fan will remember Sergei Baltacha, the Ukrainian defender who played his final game for the club after a three-year stint in 1993. It was the same year that I began to play tennis with his daughter Elena.

We would practice together in Perth and attend Scotland national squad sessions in Stirling with Andy and Jamie Murray and she had a ferocious work ethic to match her talent. She pushed herself to the limit and loved to train with the boys and prove she could keep up with us.

She went on to have a terrific career - becoming the British number one and reaching as high as 49th in the world - before tragically dying at the age of 30 from a rare liver cancer. It was devastating.