So many memories, so many numbers.

Here, then, are just a few:

January is the month to assess the relentless passing of time, so Chelsea did few people any favours when they brought on Ethan Ampadu and Callum Hudson-Odoi in their FA Cup tie against Newcastle.

It was the first time an English top-flight team had used multiple players born in the 2000s, neither of them having been born when Chelsea became the first team to name a completely non-British starting XI in December 1999.

February was all about the body.

Liverpool striker Roberto Firmino's goal in a routine 4-1 win against West Ham was another no-look effort, which meant 14% of his goals by that stage of the season had been scored without looking at the ball/goal/goalkeeper/bigger picture.

Four days earlier Mohamed Salah had become the first player in the Premier League era to score 20 left-footed goals in a season (overtaking Robbie Fowler's record of 19 in 1994-95).

Meanwhile, no part of the body was functioning for Saido Berahino. On 27 February, he chalked up two years without scoring a goal in any competition, a period in which he had played 42 games, had 55 shots and missed three penalties.

Cardiff's promotion from the Championship was one of the more unlikely stories of 2018, but even more unusual was their spell of five wins in a row against Bristol City, Barnsley, Birmingham, Brentford and Burton that culminated on 30 March.

It was the first time in Football League history that a team had won five successive games against opponents whose name began with B.

Pep Guardiola would have been keen on Dixie Dean in his prime, and there was an echo of Everton's great pre-war striker in April as Manchester City reached 100 goals in their 35th game of the season, the fastest any team had clocked up a ton since Dean's Everton romped to the title as a newly promoted side in 1931-32 (and did it in 32 matches).

This wasn't the campaign during which he scored a record 60 league goals, just a conservative 45.

The World Cup thundered into view as the nations taking part named their 23-man squads.

Germany became the fourth defending champions in the past five World Cups to fail to negotiate the group stage and managed to seal that fate by allowing their goalkeeper Manuel Neuer to get tackled approximately 12 yards from the opposition penalty area against South Korea, a manoeuvre that made former Colombia stopper Rene Higuita look conservative.

It also guaranteed this would be the first World Cup featuring both England and Germany in which the former played more games than the latter. England got to take that home, at least. 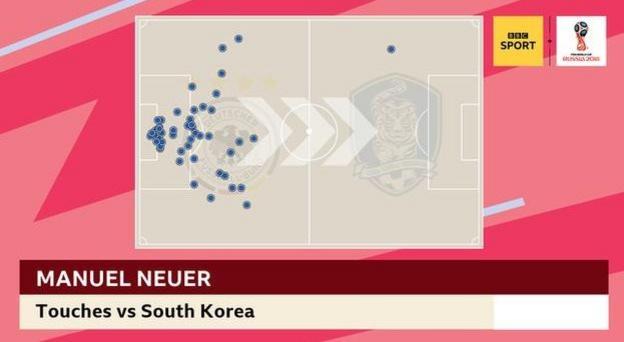 The player hitting numbers at the World Cup had a name beginning with M but it wasn't Luka Modric.

France's (then) teenage forward Kylian Mbappe progressed through the tournament hitting a variety of youth-related landmarks, which were, in ascending order of importance:

August saw Sunderland kick off their season in League One after two successive relegations had pleased no-one at the stadium except Netflix.

One man who had descended with them was Lee Cattermole, who scored a rare brace in their game at AFC Wimbledon.

A player known more for aggression than his prowess in front of goal suddenly had a League One goals to fouls ratio of three, compared to a goal every 47 fouls in the Championship and one every 77 in the Premier League.

Who says relegation is bad?

Chelsea's Jorginho did a reasonable impression of a decent darts player in September when he made 180 passes against West Ham at London Stadium, albeit in a game that ended goalless.

That treble treble 20 from the Blues midfielder is the most Opta have ever recorded in a Premier League game, and 29 more than Watford managed as a team against Portsmouth in November 2006.

If football clubs had DNA (spoiler: they don't) then Crystal Palace's would be a penalty kick on a penalty spot.

No club has proven more likely to win them in the Premier League era, and the pair they were awarded against Arsenal in October took them two clear of West Ham and four ahead of Newcastle since August 2004, despite the fact they'd played 228 games fewer than both clubs in that period.

It looked like Gianluigi Buffon's hopes of winning the Champions League had been ended by a deadly combination of hubris and Michael Oliver last season, but a summer move to Paris St-Germain has given him another shot.

He made his European debut for the club in November in the unusual position of being only seven and a half years younger than the club he was playing for. The equivalent in England would be Sheffield Wednesday fielding William 'Fatty' Foulke. And he died in 1916, so it would appear unlikely.

There's a misconception that midweek Premier League fixtures are high-scoring when in fact Wednesday (2.55 goals per game) and Tuesday (2.59) have the lowest goals-per-game rate of any of the seven days.

Such myths are not helped by rounds of fixtures like those on December 4-5, when all 20 teams scored, something that hadn't happened in the Premier League since November 2010.

With the alarming news that New Year's Day is on a Tuesday and six fixtures follow the next day, we can only hope the final matches of 2018 and the first ones of the new year bring some penalty-box action.